Daddy on the Edge of a Tempest in a Teapot

"The object in life is not to be on the side of the majority, but to escape finding oneself in the ranks of the insane." 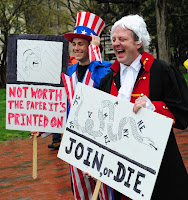 The Tea Party Candidates - are crazy. Completely...Batshit...Crazy. The plain truth is that they are not qualified to hold the offices that they seek - in fact, I'm fairly certain that I wouldn't let most of these folks serve as school crossing guards. Their plans and ideas for the USA, if followed through to their illogical conclusions, would hurt this country more than both Bush presidencies combined.

They're goal is to save money, by any means necessary. While I get that, the logic they use is the same ill-conceived logic used by the family of an ICU-bound mother who has decided to cut off her life support because "it's too damned expensive and Momma needs that money to live on!" Ill-conceived. Dangerous. Batshit crazy.

But don't take my word for it; they can tell you themselves. Ladies and Gentlemen, I give you the Tea Party - in their own words.

Here's Rand Paul, who wishes he had been in office in '64, so he could've continued the practice of segregated lunch counters;

Here's Stephen Broden, Republican Candidate for Congress in Texas' 30th District. He's all for fair elections, but if that doesn't work...well.....

Sharon Angle also wants to eliminate the Department of Education. Not fix it. Not improve it. Eliminate it.

Y'see, she doesn't want to have anything to do with the UN or the Department of Education because they're not in the Constitution. Neither is the Space Program; should we stop going there, too? Apparently, in the Tea Party World, we're gonna party like it's 1799.

Then sometimes there are folks who act out on behalf of their candidates. Since they represent the candidate, we might assume that their actions reflect the wishes of the candidate. Here's a clip of the Rand Paul supporters who assaulted a 23 year old female protester. Maybe this is the behavior Palin wants to see when she says, "Man Up"?

Here's what Joe Miller's security did to a reporter for asking questions that Mr. Miller didn't like;

Speaking of what Joe Miller doesn't like - well hell, where do I start? Here are some programs that Joe and his fellow Tea Baggers would like to change, get rid of, or basically stop paying for;

Health Care Reform
And this is only the tip of the iceberg. You have to - no, really, you HAVE to ask yourself - when someone like Joe Miller expresses his admiration for how East Germany secured their borders with a wall (and guards on that wall with "shoot to kill" orders, but he conveniently forgets that - or maybe he's just saving that part for when he gets into office), can we really afford to let him and the rest of his rag-tag bunch of lunatics take over our government?

This weekend is Halloween. The time of year when normal, everyday people dress up in costume to look crazy, or scary, or funny. But then you take off your costume and you're a normal, everyday person underneath, just like you always were. On Election Day, it's the opposite - the crazy, scary, funny Tea Party people will be dressed up as normal, everyday candidates - Trick or Treating for your vote. Don't be fooled by the costumes that they wear - The Tea Party is most definitely... a Trick.

My thanks to Mrfreedomdemocracy for this clip. I think this completes side one of the Daddy on the Edge Revolution Soundtrack.