Daddy on the Edge of the Same Old Song and Dance

I saw this in the news;

" The president unveiled an austere federal budget that calls for elimination of 115 long-established programs, significant reductions in defense and most domestic outlays and only slight increases for the administration's top priorities.

The administration's new budget is designed to advance the president's agenda within the modest bounds permitted by tough new spending caps, while still meeting the deficit reduction targets. Yet the funding shifts and program curtailments it proposes are certain to provoke bitter struggles among affected interest groups and their allies in Congress. Liberal Democrats already are accusing the president of failing to honor his campaign promises to reverse the effects of years of Republican rule and reinvigorate social spending."

There. He's doing it. Happy now? This is what we need, right? This is what the Tea Party and the Republicans in Congress have been screaming for, isn't it? Cutting social programs, tough new spending caps, deficit reduction targets - surely, this is the answer. Surely, this plan will lead us into a better, brighter future.

The only problem is, this isn't the future. This is the past. 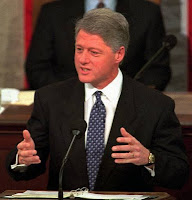 describing then President Clinton's new budget. A lot of what was happening then is happening now, to be sure - a democratic president pushing health care reform, a midterm election that resulted in a whole lot of Republicans feeling all full of themselves (the term "uppity" comes to mind) and, so hellbent was this uppity new Republican Congress on showing President Clinton who was boss, that they shut down the government as a last ditch effort to "get this liberal spending under control".

Clinton got re-elected. Guess that whole "Show 'em who's boss" thang didn't work out that well for the Repubs, did it?

You'd think that these people would remember that, especially if you were there while it was happening. Y'know who was there? John Boehner. Y'know what he was doing? Handing out checks from the tobacco lobby to members of the House. Check it;

Why would he do such a thing? Simple - in a rare act of intelligence and rationality, the House was going to vote in favor of ending government subsidies to tobacco growers...and Big Tobacco was having none of that...


The irony is totally ludicrous - these same people that want to repeal the Health Care Bill (call it ObamaCare at your own peril - I'm throwing banana cream pies in the faces of people that utter such tired rhetoric) - these same people are responsible for subsidizing tobacco growers to the tune of $944,104,224 since 1995. 1995 - that same year John Boehner acted as big tobacco's ATM machine, dispensing commission checks to members of Congress on the floor of the House - to vote against cutting the tobacco subsidies. Since then, we've paid almost one billion dollars to Joe Camel and the Marlboro Man. But Health Care is Bad? Welcome to the Republican Bizarro World.

Daddy's not going to preach about the evils of smoking; having smoked for over 30 years, that too would be ironic. Besides, the facts are already well documented -

Over 4000 chemical compounds are created by burning a cigarette, many of which are toxic and/or carcinogenic. Carbon monoxide, nitrogen oxides, hydrogen cyanide and ammonia are all present in cigarette smoke. Forty-three known carcinogens are in mainstream smoke, sidestream smoke, or both.

Smoking harms nearly every organ of the body and diminishes a person’s overall health. Millions of Americans have health problems caused by smoking.

Smoking is a leading cause of cancer and death from cancer. It causes cancers of the lung, esophagus, larynx, mouth, throat, kidney, bladder, pancreas, stomach, and cervix, as well as acute myeloid leukemia.

A pregnant smoker is at higher risk of having her baby born too early and with an abnormally low birth weight. A woman who smokes during or after pregnancy increases her infant’s risk of death from Sudden Infant Death Syndrome (SIDS). Men who smoke are at greater risk of erectile dysfunction. 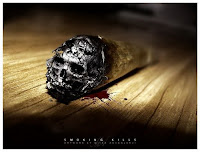 This is a no-brainer (so even Michelle Bachmann will get it) - subsidizing tobacco is wrong, it's deadly and it's stupid. And, if you're serious about cutting the deficit, it should be first on the list. Easy Peasy.

You wanna fix the budget, Uppity Republicans of 2010? Start there. End the subsidies for Big Tobacco. And this time...finish the damn job.