Daddy on the Edge of a Musical Interlude 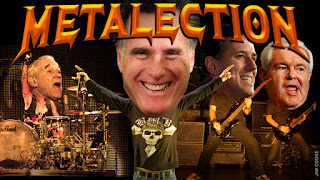 Wassup, potential voting populace?  Disclaimer - the picture above has very little to do with today's post - I just found it and couldn't resist.  I kinda like it, though - these guys might have a chance in Hell in Daddy's neighborhood if they were anything like this pic.

Anyway, there's been a lot of really, really, utterly, completely Stupid Shit coming out of political wordholes lately, and I am doing my very damnedest...to avoid talking about it.  Why?  Because rape is a serious, serious issue - it is a heinous act with devastating, long lasting consequences.  It can all too often be a destroyer of lives.  The last thing - the very LAST thing it should ever be is a prop in some misguided Republican's campaign.  Because it never ends there.  In RepublicanLand, if one of your brothers says something so completely fucking stupid that you check him for signs of severe head trauma, your reaction as a Republican brother MUST be to stand along side the idiot and not only defend him, but rationalize his behavior and question why the liberals are over reacting.  It's the Republican Double Down, and they've perfected it.  I used to think it could be countered; I used to think that if we yelled back just as loudly, that we could possibly change some minds.  But lately, I see more and more that those set in their way of thinking are not going to be changed by logic, or common sense, or facts.  Dave Ramsey has a favorite saying; "Those convinced against their will are of the same opinion still".  And it's true.  It is my fervent belief that Barack Obama has been a good President during a very difficult time in our countries history; I further think that he could be a great President if he had a Congress with any motivation to do anything (aside from seeing him fail - they have gleeful amounts of motivation for that - weenies).  But no matter what I believe, no matter what I say, it will not change the right wing hatred of this President.  Why the hatred?  Two reasons;

1. Because they believe what they hear on FOX News.

That's really it.  Seriously, let's stop sugar coating this - unemployment is down, housing starts are up, the DOW is at near record levels, the auto industry is back, banks have repaid TARP money with interest, and taxes are at their lowest rate since the 1950's  - I could go on, and on, and on - but that doesn't matter.  To the right wing, none of that matters because he's  a Secret Communist Socialist Muslim Kenyan Demon who wants to destroy the US and hates the military and hates America and hates our Freedom and blah, blah, blah - here, have some more Koolaid. It's your favorite flavor - "DumbFuck".

So anyway, Daddy's not gonna change their minds.  And I'm pretty much done trying, so I can just let this be plainly said;


Republicans, we're better than you.

There.  I said it.  We're better than you.  We're smarter than you, we're more honest than you, we're kinder than you (to everyone, not just the other straight, white guys) we're definitely happier than you ('cause all that hate'll eat you alive - and y'all seem to hate just about EVERYBODY who ain't YOU!) and, most importantly for this post - we sing circles around your sorry asses!

Don't believe me?  Fine - presenting, for your approval (or not - I no longer give a shit), Exhibit A;

On August 21st, an organization called The Chicago Young Republicans (The CYR's) put out a YouTube parody video to "Call Me Maybe" - Check it -

So...yeah.  First of all, I just gotta say, if one more dumb ass tea-bagging bimbo says "Give me back my country" I'm gonna projectile vomit in her general direction.  Sweetheart, your country is still here; it's pretty much the same as it was under the last guy except we're out of Iraq, Osama is dead and there's better healthcare.  Did you want any of those things back the way they were?  Dumb as a box o' rocks, I swear.

But secondly, and far more importantly, I am offended as both a performer and as a professional parody writer by this video.  This was a crass, amateur, seemingly rushed attempt to push through a misguided, non-factual message with little to no thought of the proper execution of such an exercise (which actually sums up the current Republican Congress quite well, so if that was your point - then job well done!)

In contrast, I now present Exhibit B.  "One Term More" is a political parody written by Don DeMesquita to the music of "One Day More" from the musical "Les Miserables" - Check it -

Daddy on the Edge of a Foodie...

As defined by the Wiki -

"Foodie is an informal term for a particular class of aficionado of food and drink. The word was coined in 1981 by Paul Levy and Ann Barr, who used it in the title of their 1984 book The Official Foodie Handbook.

Foodies differ from gourmets in that gourmets are epicures of refined taste, whereas foodies are amateurs who simply love food for consumption, study, preparation, and news. Gourmets simply want to eat the best food, whereas foodies want to learn everything about food, both the best and the ordinary, and about the science, industry, and personalities surrounding food."

Daddy...is not a Foodie.  Daddy is the homegrown result of a white bread, middle class family of six from Upstate New York - a homogenized distillation of umpteen generations of WASP cooking - our average menu was the culinary equivalent of low fat mayonnaise, but not quite as flavorful.  Oh, and there was no drinking in my house, either - and that included wine.  So...low fat mayo, and milk.

Since moving out of my parents house over two decades ago, I have certainly expanded my palate (and I've had an awful lot to drink), but I have never, and don't think I will ever be such a "fan" of food that the label of "Foodie" would ever apply to me.  Daddy can give you two shows a night of liberal politics, LGBT rights and a list of which members of Congress are weenies and whack-a-moles (don't worry Boehner - you're still Number 1!) - yeah, with that stuff, I'm here all week, you're a great audience...try the veal.

But if you want to know about the veal...really understand the veal...you don't talk to Daddy.

I met Vince Umbrino, Chief Correspondent  of "Dinner and a..." on the set of the web series, "Haywire".  (What?  You've never heard of this critically acclaimed web series featuring Daddy hisself??  Click HERE, and check it out!!)  Since learning about his blog during that initial filming session, I've been dropping  in from time to time when I need a break from my sanctimonious, socialist soapbox and there's always something entertaining to read.  The title of his very first post is,

"And I got six syrups on the table, I gotta use every one of them...otherwise why be there?
Why be there?"

And that just tickled me.  That's a smile with a side of fries (and the boy's got a thing or twelve to say about fries - don't think he hasn't).   And so, our "Smile of the Week" (or week and a half, or month...I don't know - Smile of the Fortnight?  Let's stick with week, although that's not all together accurate) goes to the lovely and talented Vince Umbrino and "Dinner and a...".  Click the neon burger and check him out - I think you'll be glad you did. 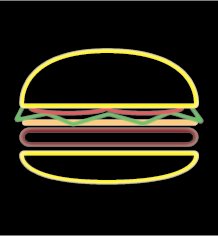 Tell him Daddy sent you,