Daddy on the Edge of a Happy Birthday


Go Daddy!  It's your birthday! 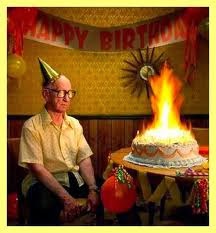 Feh.  Daddy don't like Bacardi (however, Daddy is a fan of fine tequila, so if my name comes up on your Secret Santa list...).  The lyrics above are from a 50 Cent song called "In Da Club" - the song has absolutely nothing to do with birthdays, despite the misleading opening - but it is my birthday, and it's a fun little open, and it's about as close as an old white guy like Daddy gets to singing rap, so there it is.

Number one question on your birthday?  "How do you still look sooo incredibly sexy at your age?"  Oops; my bad - that's the number one question I wish I would hear on my birthday (as opposed to the oft heard, "You're how old?  Damn, I really thought you were older.").  No, the number one question is "What do you want for your birthday?"  And it never ceases to frustrate my wife, because there is quite honestly very little that I want, at least in terms of material possessions.  I used to want things - lots of things - and I bought a lot of them, often using credit cards and ringing up my average share of the average American debt.  So, what do I want now?


I want money to be no object.

What do I desire? It's different than "what do I want?".  Desire burns, it comes from deep inside and it is rarely fully quenched.  Want is fleeting, and usually does not stand the test of time.  Right now, go into your closet and take a long hard look at those things that you haven't worn since the Clinton Administration.  There was a time when you wanted every one of those things - the fuscia Le Tigre dinner jacket, the dayglow leotards which you wore with the Flashdance legwarmers.  We had to have that stuff (and yes, during Daddy's performing arts career, even I wore legwarmers) so we bought it.  We bought it all, and if we couldn't pay for it, we put it on credit.  And God almighty, would you look what's happened since -

Current as of November 2013

U.S. household consumer debt profile:
In total, American consumers owe:
Did'ja get that?  In 2013, American consumers owe $11.08 trillion dollars in debt!  That's a lot of leg warmers.  And it's not just the price of the leg warmers; it's the interest.  The national average interest on credit cards is currently 14.95 percent.  Our interest payments alone could buy a small country.  And of course, these are just averages.  Many of us, in terms of the amount of debt we've been able to amass and the interest that we pay, are quite above average.  Some of us are just frigging exceptional.  There are many reasons for debt.  Medical issues, school loans, divorce, death - a myriad of perfectly valid, sometimes heart wrenching reasons to have gotten into the hole...

and they don't mean squat.

That's not meant to be insensitive; it is only meant to say that what's past is past, and there is no reason (aside from a legally binding contractual agreement that we and our credit card companies entered into) that we should keep spending our present and future days financing the past.  We are spending too many of our tomorrows on our yesterdays.  And society has been built up around it.

Debt has become a way of life; both for those that pay for it, and those that charge for it.  What would the world economy look like if all that debt were to suddenly disappear?  Can you imagine what kind of world it would be if people could no longer profit from debt?  Can you imagine what life would be like if we didn't embody the bumper sticker sentiment, "I owe, I owe, so off to work I go!"?

Can you imagine what would happen...if we all just stopped making the payments?

Well, that's what I'm suggesting.  Not defaulting - not unless you absolutely, positively have to.  But instead, by working as hard as we possibly can - harder than we work at our regular jobs, harder than we work on winning a Facebook debate, harder than we work to get to the next level of Candy Crush - to pay off every single bloodsucking, life altering, time wasting, dream killing debt that we have (and we have 11.08 trillion of them - that's a lot of dreams being killed.)

Alan Watts asks in the video above, "What would you do if money were no object?"  The way some of us live with our debt, that's like asking a burning man, "What would you do if you weren't on fire?"  We can't think about that; we can't think about anything at all - except the fire and the fact that we are being burned alive.  And yet, we continue to feed the very fire that destroys us.

It's time to stop the fire.  Proverbs 22:7 says, "Just as the rich rule the poor, so the borrower is servant to the lender".  As far as the Bible is concerned, we are slaves to our credit cards, to our mortgage companies, to our leasing companies - time to stop that, too.

In the United States, we talk a lot about "Freedom".  No, that's not right - the word "Freedom" is said often, usually by politicians telling you that other politicians are trying to take it away (your freedom, that is - to practice your religion, to carry a weapon, to say "Merry Christmas" - whatever "Freedom du jour" will best serve the purpose for the point being made), but if we think about it, we can hardly call ourselves free if we are carrying the weighted chains of debt.  We're just deluded slaves.

I don't want to be a slave anymore.  I desire to be free.  I'd like to walk in the sun and ask myself what I would do if money were no object, and know that I have the luxury of time to think about it, and to come to a real and fulfilling answer, because money will be no object.  That's what I desire -  for me, and for you, and for every one in the whole frigging world.

I want us all to be truly "Free".  That's all I want for my birthday.

That, and the tequila...

You could get me the tequila if you really wanted to...