We know the theory - the Aztec calendar runs out when you get to the year 2012. Why? End of the World. Doomsday.

Scary shit, huh? The good news is, that's only one possible future. You and I, we're like Scrooge, staring at the visage of our own tombstone, begging, pleading - "Are these the shadows of things that must be, or are they the shadows of things that MIGHT be?" We know the answer - Scrooge changed his ways, his course, and his destiny. That future doomsday is real, and it is coming, but not in the way they portray it in Hollywood. The real end of the world looks a little something like this; 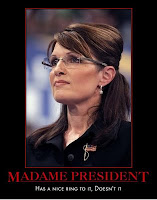 Don't think it could happen? Well, it can, and it will, unless we take drastic action. We need to stop this, and it starts now. Now, what I'm going to ask of you will sound strange, but I truly believe that this plan will work better than any other plan to defeat Palin in 2012. Ready? Here it is;

Buy stuff. Buy A Lot of Stuff.
"It's the Economy, Stupid". Remember that line? Clinton trashed Bush One with that line, and don't think that Palin won't run with it. We've waited long enough for the Dems in power to make things better (and they were so bad at running for office that they didn't even have the sense to brag over the things that they did do right) - we need to turn this economy around ourselves. And we need to do it now.

My wife is gonna be looking at this and wondering if she should call the guys in the white coats for me, because if Daddy, Frugality Miser extraordinaire is calling for a (gasp!) shopping spree, then surely Daddy must have completely lost his mind. Maybe I am a little off, but that's nothing compared to the full fledged maniac that Daddy would become under a Palin Administration. So please, for my sanity and the world's, buy things this Holiday season - as many domestically made, locally sold items as you can possibly afford to. Also, if it's not too much trouble, buying a house right now would really do a lot of good for the President's re-election campaign. If you can't buy a house, maybe you could help someone from having their home foreclosed upon. Could you buy a car? Daddy would, of course, love it if you bought a Prius, but seriously - any car would do! Can you give someone a job? Even part time? Please - whatever you can do to help make this economy better means the world...literally.

Much of America is on this Anyone But Obama kick. It's unfair, it's undeserved (because he's actually gotten a lot of really good work done), but it's there and you can't change some people's minds, no matter how persuasive your argument. The only thing that will bring people around is if things get better - on the basic level - if them and their's got a job, and a home, three squares and all the comforts.

We can do this. We need to do this because obviously, the folks with the real money just can't be bothered to help make things better. They're all about getting their tax breaks extended because they need that money so badly (and by the way, the next time you see someone that obviously makes more than $250k a year, throw 'em some pocket change, willya? Mitch McConnell tells me that they're realllly struggling.) So screw them. I know that if you and I really knuckle down here, we can spend like we did in the roaring '90's and turn this ship around.


Buy me something pretty,