Daddy on the Edge of The Source

After all the campaigning, all the electioneering, the ultimate three ring circus that will go down in history (until the next one) as the most expensive midterm election we have ever had, Daddy needed to rest his eyes, calm his mind and step away from the political noise machine that his television had become.

That, apparently, is when they started talking about "Obama's Passage to India"...

(Okay, I know the following video is over fourteen minutes long, but it is so worth watching and totally pertinent to this blog entry, so go get a cup of coffee and a little nosh, sit back and enjoy...)

Indeed. How do you talk to those people? In the same vein as speaking truth to power, I guess this would be speaking sense to nonsense. It's a hard sell, of course - trying to convince right wingers of anything that smells the least bit left wing to them. So maybe, instead of trying to sway you with my liberal arguments, or trying to explain that this story is just another Republican smear job...

I would ask that you consider the source.

Where did the Obama India story come from? "Some Indian Official" basically pulled numbers directly out of his ass and splashed them onto the internet, where right wing nut jobs babbled them verbatim without even stopping to think if there might be any truth to it, and if it was their responsibility as reporters or pundits or members of Congress to see if there was any truth to it. Nooooo.....that wasn't necessary, because the story had met the Republican Talking Point Criteria - it made President Obama look bad. That's all that matters to them. And besides, it must be true - it's on the internet.

Rush Limbaugh is an Idiot. Now, that's not my opinion - that comes from none other than Rush's own mother. Describing the two semesters he spent attending college at Southern Missouri State University before dropping out, she says; "he flunked everything". So, either Rush is an idiot, or his mother is a liar - and I would never call his mother a liar.

Rush Limbaugh didn't serve in Viet Nam due to his "4-F status". Okay, I'm not going after guys who couldn't serve because of real medical issues, but it says on Wiki that Rush couldn't serve due to either (Either? They're not sure? I don't know - "either" sounds a little bit "dodgy" to me) a football knee injury or a diagnosis of Pilonidal Disease. What is Pilonidal Disease? Back to Wiki;


"A pilonidal cyst, also referred to as a pilonidal abscess, pilonidal sinus or sacrococcygeal fistula, is a cyst or abscess near or on the natal cleft of the buttocks that often contains hair and skin debris."

Rush Limbaugh didn't defend his country because he had a hair up his ass. Some treatments for Pilonidal disease have the patient returning to normal physical activity in one to two days, more than enough time to get on that plane to Da Nang - but you go ahead, Rush - you take that 4-F status so you can go on to a long, illustrious radio career where you sit on your ass all day - that same ass that got you out serving your country. Listen, old man - don't you ever talk about "Phony Soldiers" again. Pussy.


Rush Limbaugh mocks the sick and disabled. You would think that a man who has survived the awful ravages of having a hair up his ass would be more sympathetic, but no - this douche mocks people with Parkinson's Disease. And not just anyone with Parkinson's - he likes to make fun of Michael J. Fox. This is probably the nicest guy in Hollywood - Alex P. Keaton, Marty McFly - and Rush the cowardly moron goes after him (admittedly, this is several years old, but it still outlines my point that Rush is a douche)

Oh, I almost forgot! Thanks Rush, for reminding me with that "off his medication" crack;


Rush Limbaugh is a junkie. Oh, okay...I exaggerate just a bit - Rush Limbaugh is an abuser of prescription drugs. There...better? Oxycodone, Hydrocodone...over the years, Rush has had a love/love relationship with painkillers, while simultaneously saying on the radio, "Drug use, some might say, is destroying this country. And we have laws against selling drugs, pushing drugs, using drugs, importing drugs. ... And so if people are violating the law by doing drugs, they ought to be accused and they ought to be convicted and they ought to be sent up." Ironically, he was probably high when he said that. But of course, the junkies high priced lawyers got him off.

We could go on like this all day - he's on his fourth wife (real sanctity of marriage there), he gets his giggles calling our current President, "Barack the Magic Negro" and plays a little song by the same name, he was forced out of a deal to buy the St. Louis Rams because he is a known racist - oh yeah, and there's this - Rush Limbaugh gets paid 50 million dollars a year, which means.....


Rush Limbaugh is one of "The Elite".


These are the facts from the internet. This is what the internet says about "The Voice of the Republican Party", the true head of the Republican Party. That he is a hypocritical, drug abusing, crude, cowardly, racist idiot. Is this really the guy you want to be getting your news and opinion from? Is this a guy you truly trust and believe without question? Think about it. Because this guy... 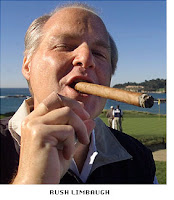 Is all of these people
rolled up into one. 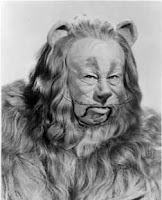 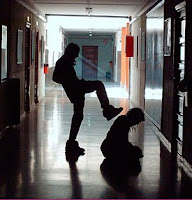 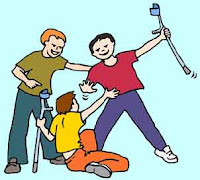 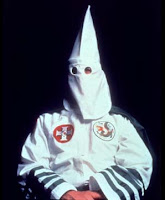 Mario Piperni is the source of this next video - just a little bit of weekend fun. See more of him at mariopiperni.com.

Keep the Faith. Seek the Truth.