Daddy on the Edge of Shamelessness

"Most mothers on the earth today are poor, uneducated, and deeply in love with their children. And they are buried in shame and silence."
This is one of the more poignant lines from a blog entry I stumbled upon this morning. I didn't think it would be my cup of tea, but was pleasantly surprised. Seems that more and more Daddy is becoming a fan of the completely unabashed. Check it;

Have you lived like that? For a week, a minute, or a lifetime? Have you known someone who has? It's been said that everyone on the planet should have to work in food service for a week, just so they might realize how difficult it is and maybe give their server a bit of slack the next time their three minute eggs are clearly only 2 3/4 minutes done. Maybe that's true of living hand to mouth as well. Maybe that should be a prerequisite for living in this country. I daresay that if more people had to live the low income lifestyle for a period of time, they would be a lot more compassionate to those that live it every day.

The same can be said for so many aspects of life that fall "outside the norm". Why is it that the majority of the Western World seems to base all of it's opinions of right and wrong, stylish and un, good and bad, tasteful and not, on this guy? 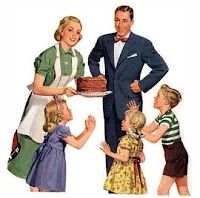 This guy isn't real; he never existed. Were there guys that walked around that looked like this guy? Sure, there still are today. They like to pass judgement on all that is not white, straight, male and middle class. The trouble is that this guy beats his wife, or peeps on his neighbor, or steals from the church, or cheats on his taxes, or fools around with the cleaning lady, or gambles the kids college fund, or drinks way more than he should. This guy broke eight out of ten commandments to climb the ladder of success, just so he could look down on everyone else not at his level. He can now cast shame on those below; shame for not achieving all that he has. Shame for not having this happy family that he has; shame for not being the white straight middle class male that he is.

Quick question; who give this guy such power? Society did; we did. Who can take it away? We can. And the first step is the easiest...and the hardest;

We must not be ashamed of ourselves.

No one wants to be laughed at. No one wants to be mocked. No one wants to be thought of as "less than" for their beliefs, or their preferences, or for who they are. So we sort. We divide. We slice and dice our lives, ourselves, into what is and what is not acceptable for public consumption. People will accept that you have a routine; they may not accept that you have OCD and must hit the light switch five times. People can know that she's frugal, but God forbid anyone knows that she occasionally has to use food stamps. He's the President of the Rotary Club - everyone knows that...and once a month, he wears heels and an evening gown and goes dancing - no one knows that.

When we do that; when we give the world less than what we are for fear that they will reject those parts of us and, in so doing, reject the whole of us, we are being unfair to ourselves, to them and indeed, to the rest of the world. It is only through standing up, through showing who and what we are, that people can understand and come to accept those parts of us - whatever parts of us that we think people just can't handle. In doing so, we give others in our shoes the opportunity to see that it's okay to be who we are; it's okay to allow our whole selves to shine.

It's okay to be unashamed.
We are what we are. We do what we do. God did not put us on this planet to assimilate into one big "Father Knows Best" character. A scientist doesn't mix different chemicals hoping that they will all become the same; he mixes them because he knows that their combination of differences will provide a desired result.

If we do the unimaginable, If we show our true selves,
the world as a result will be better than we ever could imagine.

I thought about ending this post here, but there is one more thing that needs to be featured. I came across another blog entry this morning, this one not nearly as inspiring as the one above, but one that needs to be discussed, nonetheless. This blog entry deals with the Tiffany Club of New England - here's a little about them(and I've added a link in the links section for anyone who would like to learn more);

Tiffany Club of New England is a social and support organization for the transgender community.

Pretty harmless, huh? Not out to hurt or subvert, just finding some common ground to express that part of themselves that society isn't always ready to see. This finding of common ground, this desire to simply be, was looked at as an opportunity by a group calling themselves Mass Resistance, a "pro-family action center" in Massachusetts. They decided to sneak into a Tiffany Club function and secretly videotape transgender people using the ladies room. This was done in an attempt to fight passage of a hate crimes bill. Here's the link to that story;

As the writer said, the very acts of Mass Resistance outline the need for hate crime legislation. The thing to remember here; the message to take away, is that none of those transgender individuals should be ashamed of themselves in any way. In fact, I applaud them for the courage to openly express who they really are. The shame should be reserved for the ones manning the camera, the cowards who can't enjoy this world unless everyone assimilates to their views. For them, and to wrap up this post, I have not one, but three quotes from Buddha, Daddy's "Wise Dude of the Day".


Holding on to anger is like grasping a hot coal with the intent of throwing it at someone else; you are the one who gets burned.
Buddha

He who experiences the unity of life sees his own Self in all beings, and all beings in his own Self, and looks on everything with an impartial eye.
Buddha

Daddy on the Edge of Oprah

I'm linking to Oprah. Dear Lord, what kind of girly man have I become? Do I have to buy metrosexual skin buffing agents now?

I'm not gonna do that, but I am indeed linking to an article that I read this morning on Oprah.com. How I got there I do not know; sometimes Daddy goes on internet spirit walks, drifting from link to link 'til he finds some truth (or pictures of Republicans in compromising positions - that's always fun).

So, here's some truth I found today; a slice of life that resonated. This article touches on a subject that I want to delve into at a later date, but whereas I would approach the topic using the patented Daddy recipe of a few facts, a smidge of humor and a generous helping of self aggrandizement and sarcasm, Allison Cooper, the author of this story brings her message home in a more personal way than I could ever muster. She's a beautiful, beautiful writer.

What Happens When You Find the One...And He's Nothing—Nothing—Like You Expected?
Posted by K at 10:24 PM No comments:

Daddy on the Edge of Time Management 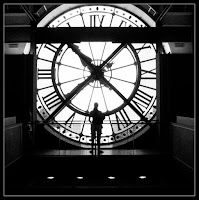 The title of this entry is the joke - Daddy is the WORST at time management, because Daddy hates to ask for help (which he got from his Daddy, but we're not gonna go there right now). I went from not working at all whilst in my recovery (that's your assignment for today - try to use the word "whilst" in a sentence twice today, okay? C'mon, it'll be fun! You'll feel all English and stuff!) to working on way too many things at once, and there doesn't seem to be an end in sight. That's good from a financial standpoint, but really bad from a time management standpoint.

As Daddy paused in thought, he looked down at his watch and realized that he was late for work...again. "Big surprise", Daddy grumbled. "I bet my boss is gonna have my ass for breakfast. He can be such a prick sometimes..." It was then that Daddy realized that he was indeed self employed, and sheepishly went back to his blog entry.

So, in the interest of using my time more wisely, from time to time I am going to farm out this space, and give you a link to another blogger that gets the Daddy Seal of Approval. This first one is a guy that seems to have had a momentary flash of brilliance, and then gotten too busy to publish any more, but the gem he left behind had me laughing out loud.

Ladies and Gentlemen, I give you "Sweet 16" from the blog "House Husband" by Jason Nash. Enjoy.

Note; The photo above, entitled "Clock Silhouette" is by ginnyhaha and can be found at DeviantArt.com
Posted by K at 9:02 AM No comments: