Daddy on the Edge of Acceptance

A friend of mine posted a link to a youtube vid today. Check it;

I laughed; it was amusing - and it reminded me of almost the exact same scene in the 1984 Tom Hanks film, "Bachelor Party". We see these types of ads often, as I pointed out with the vid I posted in response to my friends -

I had seen that ad years ago and knew my friend would appreciate it - it had that same "putting one over on the guy" vibe as the first vid, and everyone always gets a a good chuckle out of that, right?

As I was leaving the YouTube site, I noticed that someone had left a comment about the video - 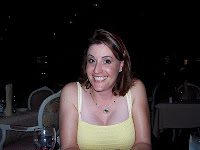 This is Chloe Prince. Chloe is a male to female transsexual who has a condition called Klinefelter's Syndrome. Essentially, that means that, while most males have XY chromosomes and women XX, people with Klinefelter's have at least two X chromosomes and at least one Y. Chloe spent the first 33 years of her life as a male, and then transitioned into her new life as a woman. She and her family were featured in an ABC Primetime Special called Family Secrets. You can view the special in it's entirety and read all about Chloe at her site - Pink Thoughts (you can click her picture to get there as well).

So anyway, her comment got me thinking (because Daddy has this nasty habit of second guessing and over-analyzing every minute aspect of his life on a daily basis) - Daddy is an advocate of transgender rights - was I giving some sort of tacit approval to treating the transgendered community as a joke? She said the ad aimed at dehumanizing - now, I don't know if dehumanizing is the correct word for it, but it does seem to foster the continuation of the invisible freak show tent that we still allow to envelope the trans community.

Daddy has never been an advocate of "Transploitation", whether it's Jerry Springer or "There's Something About Miriam" a reality show which featured six men wooing a 21 year old model, waiting, of course, until the last episode to reveal that she was actually... a transsexual! (Rimshot! Fooled by the old hidden ball trick! Welcome to the Freak Show.)

But this didn't seem like that - this was a humorous twist on commitment, it wasn't meant to be serious or realistic, it was...funny?

It's a tough one to figure out, and right about now I feel like I've written myself into a corner. Because that first ad was funny. And honestly, I don't think it's wrong to laugh when something is funny. The thing that we have to realize, I think, is that the character we laugh at on the television screen is not an accurate reflection of real life people. Case in point (from Ted Cornelius over at ugo.com)- 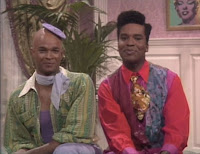 "Blaine and Antoine - hosts of "Men on Film", which eventually spawned into "Men on Art," "Men on Vacation" and naturally, "Men on Men". Portrayed by David Alan Grier and Damon Wayans, respectively, the two extremely femme gay men would base reviews solely on, um, topics that stereotypical gay men would be looking for (but funny - look, we said this idea probably wouldn't fly these days!). However, what usually got the crowd howling were Blaine and 'Toine's review system of "snaps" - two snaps up was good, but when you land the "two snaps, a twist and a kiss - can't touch this" rating, you were solid gold!"

These guys were funny. And though some folks may have cringed at their over the top portrayal of gay men, Daddy never once got the impression that all gay men (or all black men, for that matter) acted like this. So that's it, then. Separate the performance from the real life. Got it. Easy Peasy. Done and Done.

Except.....(Damn! Daddy had nearly written himself back out of the corner, parlayed his way out of this social conundrum, but Daddy doesn't let Daddy get off that easily.) Advertising shapes our attitudes - it's what makes us think that smoking is sexy, or that reeking of Axe will have women chasing you in droves, or that getting a frontal lobotomy for a Klondike Bar seems like a fair trade. Advertising shows us the "everyman" and wants us to identify in some way with that person, making the separation between fact and fiction blurry once again. Add to that the advent of reality tv, where the character actually is the person (edited for content, of course), and the line is further blurred.

Add to that political distortion for the purposes of swaying an electorate into an irrational way of thinking, and it all goes to Hell in a hand basket. Does any sane, rational person truly believe that if you allow two people of the same sex to marry, that that will open the door for people that want to marry a chair? Do sane, rational people in moments of clarity really believe that a male to female transsexual would go through years of therapy, more years of hormone treatments, electrolysis, facial reconstructive surgery, genital electrolysis, tracheal shaves and finally sexual reassignment surgery - that they would go through all of that just so that they could walk into the ladies room and listen to you tinkle in the next stall? These are the types of arguments that are heard lately. And they're pathetic.

In my opinion, the whole reason that we're having such a hard time with Don't Ask-Don't Tell, ENDA and any other LGBT anti discrimination law is because legislation and acceptance must go hand in hand for real, lasting progress to be made. And when the body politic doesn't want progress, they inspire fear in the people, because they know that fear and acceptance do not mix. Without acceptance, legislation does not happen and the status quo prevails. In the end though, the body politic can go fuck itself. When acceptance becomes widespread, when enough hearts and minds put aside their fear and see that there was never anything to be afraid of, then the people will write the laws, if any such laws are still needed. And the more the transgendered community becomes accepted, the less en vogue will that particular humor be with advertisers. And the Karen Diors, the Miriam Riveras and the Chloe Princes of the world may finally get a chance to relax...and be themselves.

Acceptance is not something that can be legislated. Rights can be legislated; acceptance cannot. Acceptance happens one person, one gesture, one heartbeat at a time and, when it does, it is usually not with huge fanfare, but with simple acts. Quiet humanity. Tacit Approval. And it can make you cry.