Daddy on the Edge of a Tagalong 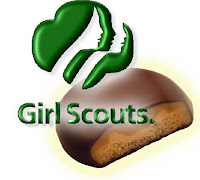 I know, I know - lots of people make New Years Resolutions to lose weight, and my demand that you eat more cookies surely flies in the face of that...but you must. You simply must. Not just any cookies, mind you - I'm asking that you consume mass quantities of Girl Scout Cookies. Why?


Because there's a terribly misguided little girl in California who wants you to boycott Girl Scout cookies. She wants you to punish the organization for trying to be progressive, for trying to be fair - she wants to hurt The Girl Scouts for acknowledging and accepting that girls come in all shapes and sizes - and that sometimes, they're not born with girl parts.

The following video was difficult for me to post. I don't like giving this girl and her message a platform, but she raises issues here that do need to be addressed and, rather than paraphrase her words, I'm putting the whole damned message right here for you to view. Listen closely to what she has to say - there will be a test after;


Now, let me say right here - Daddy doesn't want to hate on this girl, and Daddy's not gonna hate on this girl. I've seen some people say some really nasty things in response to this video - called this child all manner of hateful names, and it saddens me. No; strike that - it pisses me off. Is she misguided? Yes, I believe she is. Is it unfortunate that she has been taught to believe what she seems to believe? You betcha. But let's keep this in mind - she's a kid. And sometimes kids don't know any better. Sometimes kids are just repeating what they've been taught, and sometimes what they've been taught is seriously flawed.

I've got a couple of issues with some of the terminology that you use in this video. Apparently, a bit of clarification is in order. Let's start with your repeated use of the phrase "transgender boys". Now, transgender has become somewhat of an umbrella term; based on what you're describing - a child born a boy who insists that she is a girl and wants to live as a girl - that type of person would be called a transsexual. Any good informational website dealing with transgender issues will explain to you that, when discussing transsexual people you are basically dealing with two terms - "Male to Female" (aka M2F) and "Female to Male" (aka F2M). When you say "transgender boys" I know that you're talking about transsexual people that were born as boys who are now living as girls (M2F), but your term means exactly the opposite. A transgender boy would be someone who was born as a girl who is now living as a boy (F2M) and, on average, pretty much the last thing a transgender boy would want would be to join The Girl Scouts, okay?

It is your brain, not your vagina or your penis, that tells you who and what gender you are. Someone who is truly transgender, who strongly identifies as being of the opposite sex, does not simply "want to be a girl"; someone who is truly transgender sees themselves as being of the opposite gender, and desperately wants to be accepted as such. The kids you are referring to don't "want to be girls"; they are girls, and they can't understand why you can't just let them be who they know they are.

Ironically, another of your statements drives that point home - you say that The Girl Scouts encourage their members to "just be yourself and who you are - not something you're not". Transgender people who are still in the closet - who are afraid to present their true, core being to the world for fear of ridicule, hatred or brutality - they feel unable to be themselves. They feel forced to be something they're not. They feel compelled to comply with norms and stereotypes that do not apply to them; forced to engage in activities where they find no joy, simply because it is what is expected of their assigned gender role. This transgender girl that's got you in such an uproar (who is seven years old, by the way), is actually attempting to be herself. She wants to be just like any other girl and, in this society, that is one of the bravest things she can do.


Understand this - if you are "yourself", everyone accepts you as such. When transgender people are "themselves", they go out into the world with the full knowledge that they may be laughed at, mocked, outed, discriminated against, beaten or killed. And yet, they go.

You wish you could be that brave.

Finally, you are upset with the GSA for making these allowances and exceptions "for a small amount of people". Sweetheart, just because you can't see something, doesn't mean it doesn't exist. There are more transgender people in the world than you can possibly imagine. The more accepting we can be as a society will help determine how many more of them will come out of the shadows, in to the light of day; longing for that acceptance - looking for the type of folks that will help people at all times. Looking for people that will embrace the following as it applies to them;

I will do my best to be

Courageous and Strong, and

Responsible for what I say and do,

respect myself and others,

make the world a better place, and

be a sister to every Girl Scout.


To learn more about The Girls Scouts, click Here


Do a Good Turn Daily,

Email ThisBlogThis!Share to TwitterShare to FacebookShare to Pinterest
Labels: The Girl Scouts, transgender