Daddy on the Edge of Health 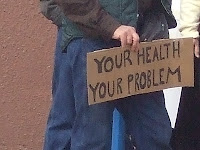 Okay, first thing - an apology. I had fully intended to post more content on this blog than I have been recently, but it's not my fault. It seems that, in addition to my recent heart adventure, I've also been suffering from a little known disease called "Blog Avoidance Hyperplasia" or BAH! It's a condition where you really want to post a blog entry, and you start to research and write, and then either you lose steam, or it's not coming out as perfectly as you may have liked, or you're late for work, or the Tasmanian Curling Team has just taken to the ice and, well - how the heck could you miss that?? In any case, BAH! can hit anyone, at anytime and the worst part is - now that I've shared this information in an open forum, my insurance company can now look at it as a pre-existing condition.

And that's what Daddy is here to rant about today. It's snowing like a maniac outside, so I'm stuck at home and I've chosen to watch the Health Care Summit on CSPAN. It's pretty funny - they're all there under the guise of wanting to work together, and I think that some on both sides of the aisle are definitely there for that reason, but most of them are just there to call the other side stupid again, and tell them why their plan is wrong...again. We're at the point where both sides are saying, "You can't make up your own facts", which would lead you to believe that both sides think their facts are the right facts - which leads me to ask, How can we even have two sets of facts?? This is why I'm seriously considering changing my party affiliation to Independent.

They could actually use an Independent at these proceedings (I understand why they don't have one there - Independents are in short supply on the Hill, which means that, if you want one in the room, it's probably gonna be Lieberman, and who wants that guy around?). The reason being that, with all this party bantering back and forth, the few real, salient points that they are uncovering often get lost, whereas an Independent thinker like me is busily scribbling them down. These guys are a lightning rod for ideas - they just don't know it, and that's the truly sad thing about our leadership. For Example:

Food. What? You didn't hear them talking about food? I did, but I was admittedly reading between the lines. They're talking about who's going to pay for the sick people - no big surprise that no one is running over to pick up that tab. I choose to look at it this way - if people feel better, they won't need to see the doctor as often, and we won't need to come up with as much money. Simplistic? Yeah, of course. Occam's Razor, baby. So, back to the food.

Years ago, Monsanto created a cancer drug. It doesn't stop cancer; it gives you cancer. As a result, American milk is banned in Europe.

Why is American Milk Banned in Europe?

European nations and Canada have banned rBGH to protect citizens from IGF-1 hazards.

Monsanto Co., the manufacturer of rBGH, has influenced U. S. product safety laws permitting the sale of unlabeled rBGH milk. (Monsanto would lose billions of dollars if rBGH were banned in America.)

Q. Is there any milk not contaminated with rBGH and IGF-1?
A. Yes. Milk that is clearly labeled “NO rBGH” is free of rBGH and does not contain excess levels of IGF-1.

Q. What about cheeses?
A. American-made cheeses are contaminated with rBGH and excess levels of IGF-1 unless they’re labeled “NO rBGH”. Imported European cheeses are safe since Europe has banned rBGH.

We gave Monsanto over $3 million in tax credits in 2009 for - wait for it....research and development. Who paid for Monsanto to figure out new ways to give us cancer? We Did!

It needs to stop. Take back the tax credits until Monsanto goes back to making milk the old fashioned way. In the meantime, Organic milk is better for you and you can often find it locally, which is better for the planet and better for the local farmers.

Next! Children of the Corn

"While the commercials claim that it's fine in moderation, the truth is that the whole problem with high fructose corn syrup in the first place, is that moderation is seemingly impossible. The syrup interferes with the body's metabolism so that a person can't stop eating. It's truly hard to control cravings because high fructose corn syrup slows down the secretion of leptin in the body. Leptin is a crucial hormone in the body that tells you that you're full and to stop eating. That's why it's so closely associated with obesity in this country. It's like an addictive drug.

It's like crack. So, in essence, we're subsidizing crack dealers. Yeah...gotta stop that, too. Here's a couple of fun maps for you. The first two show obesity levels in America - 25 years ago to 2008 - check it;

Wide sections of the Southeast, Appalachia, and some tribal lands in the West and Northern Plains have the nation's highest rates of obesity and diabetes. In many counties in those regions, rates of diagnosed diabetes exceed 10 percent and obesity prevalence is more than 30 percent.

The estimates, in this week’s Morbidity and Mortality Weekly Report, are the first to provide county-level snapshots of obesity across the United States. They also update diabetes county-level estimates released in 2008. The first map is Obesity; the second is Diabetes.

Just a side note after looking at these maps - what the heck is up with the Southeast? I mean seriously - if it's an environmental thing, then let's figure out what it is and fix it. If it's just about diet and exercise, then dude - take a walk every once in a while...away from the Krispy Kreme's.

I've got a lot more to say in upcoming posts. I love when these spoiled rich kids squeam that they just don't have any money to help out the rest of the American people, when the amount of cash they waste in a year could finance the colonization of Mars. I'll be talking about my money saving ideas in the weeks to come, but first;

Finally! Everybody in the Pool!

"The more people in the pool, the cheaper it is for everybody."

"The Insurance company doesn't have pre-existing conditions for us because we're a big group."

There was a lot of talk today about small businesses forming pools for insurance. The reasoning is that the bigger your pool, the better your bargaining power. Many of the politicians on my TV today raved about their pool. They love their pool, and they think it would be a great idea if we went and got our own pools, too!

Nah. I paid for your pool, Politician Man - and I wanna swim in it.


The bigger the pool, the better the pricing? Fine - let us all - every damned American Citizen, in your pool. Right now, the Federal Employee Health Benefits Program covers 8 million persons in total. Think of the price reductions if we all came in. Noted economists say this is the way to go, and I couldn't agree more. If it's good enough for you, then it's good enough for us. Because (and this is important) you, my political dunderheads, are not any better than us. Stop thinking that you are.

Wishing you all the best of health,