Daddy on the Edge of Getting Biblical

Oh, California. Land of raisins and Chardonnay, live studio audiences and Sea World, Tales of the City and the Streets of San Francisco -

and beauty queens that just don't know when to shut the hell up.


If you are unaware of what I am referring to, then please let me give you the skinny. First, the Miss America pageant introduced us to a lovely little firecracker named Carrie Prejean. Simply the epitome of Miss California; blonde hair, blue eyes, toned and tanned and rockin' the bikini the way Cheryl Ladd used to when her poster hung on my tweenage wall.

But then she opened her mouth. Pretty mouth, pretty teeth...but the nonsense that spilled forth only made us long for that other pageant chick/rocket scientist who blathered on about maps.

Carrie was asked about same sex marriage during the 2009 Miss USA pageant. She was asked by pageant judge Perez Hilton whether she believed every US State should legalize same-sex marriage. She responded,


I know - shocker, right?? I mean, not as much of a shock to me as the fact (???) that "we live in a land where you can choose same sex marriage or opposite marriage" - holy crap, when did that happen? Oh, wait - I get it - she didn't mean that they were equal, or that they carried all of the same rights and benefits - she just meant that you could choose! Hmmm...decisions, decisions....do I choose the marriage that's recognized anywhere on the planet, or the one that's recognized in...what is it now, 4 states? Until they change their minds, right? Yeah...choice is alive and well, chica.

But that's yesterday's news. Today's news is that apparently, being stupid and hateful is a new pageant category (between talent and swimsuit I think). Here's our next contestant!


(Editorial Note: Okay, I just had to share this. I couldn't remember this next girls name, so I googled "dumb beauty queen" and bam! There she is! Gotta love my Google.) 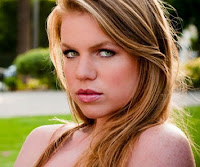 Lauren, when asked about her views on gay marriage, had this to say on the subject;

“I feel like God himself created mankind and he loves everyone, and he has the best for everyone. If he says that having sex with someone of your same gender is going to bring death upon you, that’s a pretty stern warning, and he knows more than we do about life.”

So, like - Dad loves all of us kids the same, y'know?
Cause like, he's sooo totally cool and he like totally wants
the best for all of us....except for you, Billy.
Yeah...Dad's like gonna totally cut off your head
with a rusty sawz-all. I guess somebody shouldn't have
played "five minutes in the closet" with Jimmy Stillman.
But, you know what they say -
Daddy knows best!


You can hardly fault her for being hateful, because the quote just sounds so...ditzy. I mean, c'mon - "I feel like God Himself created Mankind". As opposed to what - like He farmed out the work? Like God created the Heavens and the Earth...and on the fourth day God's friend Larry swung by and knocked out the whole mankind project. Yes Lauren, God Himself created mankind - He's basically the only one for the job.

"He has the best for everyone". Well...yes. You'll get no argument from me there, 'cause I learned the song;

Hey, y'know what? I sang that out loud just now and I just don't feel that pissed at you anymore, Lauren the beauty queen! I can hardly remember what I was peeved about! Let's just look at that last little bit you had to say - "If He says that having sex with someone of your same gender is going to bring death upon you, that's a pretty stern warning, and He knows more than we do about life."

Damn. That just sucked the Kumbaya right out of me.

Okay, little girl - let's get Biblical.
Y'know, Daddy is an ordained Minister. Daddy's Daddy studied to be a Minister, Daddy's Mommy was a missionary, Daddy's cousin is a Reverend, and Daddy's wife is descended from the 12 Tribes - so I know a thing or two about religion. And let me say this about that; you cannot, and should not, cherry pick the bible. The bible is not an ala carte menu - you cannot have "Do unto others" without "It is easier to pass a camel through a needle than for a rich man to enter the kingdom of heaven". But those references are from the New Testament (or as my wife would say to me, "Your book".) The reference that you reference is from the Old Testament. I know this because the Old Testament is like a Quentin Tarantino movie - everybody dies in the OT! They laid down a lot of these rules in the book of Exodus - right after we got the Ten Commandments, we got the basics - if you beat a guy so bad that he dies, you die. If you beat the crap out of your parents, you die. If you kidnap a guy, you die. Makes sense, right?

But then things started getting extreme; if you curse your parents, you die. But if you beat your servant with a rod so bad that he dies, you shall surely be punished (notice you didn't die from that - weird, huh?) If an ox gores a man, the ox dies, but the owner of the ox gets off. However, if the ox has a prior record of goring folks, and the owner didn't send him to rehab or put up an ox fence or something, and the ox kills again, then the ox gets stoned and the owner gets put to death. Folks, I gotta tell you, there must have been some real problems with the legal jurisprudence of Oxen, because there are like seven verses in Exodus alone that specifically deal with "ox law".

I could go on, and on....and on. Exodus, Leviticus, Numbers, Deuteronomy laid out Law and Order - OT style, and the punishment for a whole host of things was death. Seriously, with all the stoning and killing and ox goring, it's a miracle anyone lived long enough to greet Jesus when he finally came to town. Oh, and that's another thing that the selective reading Christian often forgets - when Jesus came, his ministry caused many changes in the old law; his existence made much of the old law obsolete as he fulfilled it. And, it's always important to recall that Jesus was very big on love and acceptance; not smiting and killing. Christ was the Tony Robbins of his time, because he was all about self improvement. He didn't say, "Go getteth up in thine people's faces and tell them what they're doing wrong". He said instead, "Why do you look at the speck of sawdust in your brother's eye and pay no attention to the plank in your own eye? How can you say to your brother, 'Let me take the speck out of your eye,' when all the time there is a plank in your own eye? You hypocrite, first take the plank out of your own eye, and then you will see clearly to remove the speck from your brother's eye." He didn't say, "Do unto others, then tell them I said it was okay." He said instead, "Do unto others as you would have them do unto you". A friend of mine said today that "he really hates being told he is damned to hell first thing in the morning". Can you think about how that feels, Miss Beverly Hills nee Pasadena and all the other pageant gals that think this might be a good torch to carry? Nobody wants to hear crap like that, even if you realllly think it's true. At least not before coffee.

I was going to try coming up with a pithy quote to wrap this up, but it's late. Here's a nice one from Elisabeth Kubler-Ross;

"People are like stained glass windows. They sparkle and shine when the sun is out, but when the darkness sets in, their true beauty is revealed only if there is a light from within."

Daddy (The reigning Miss Gotham City, USA)
Posted by K at 4:51 AM