Daddy on the Edge of a Fight 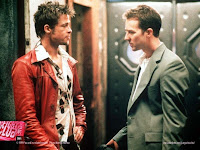 **I originally wrote this piece for another blog nearly two years ago. Since it still seemed topical, I wanted to share it on this blog. Hope you like.**

NOTE: This post deals with the movie "Fight Club". If you have not seen this movie, please see it. Daddy gives it two enthusiastic thumbs up. If, like a friend of mine, you didn't see this film because you don't like movies about fighting, let me fill you in - Fight Club is about a whole lot more than fighting. In fact, IMHO, fighting is probably the least important part of the flick.


"Do you know about Tyler Durden?"

Meat Loaf says this line to Edward Norton in the movie, "Fight Club". Tyler Durden, played by Brad Pitt is a larger than life, in your face character who takes the rules and constructs of society and turns them upside down to suit his needs and desires. It is Tyler Durden who, with the help of Edward Norton's character, starts Fight Club and, throughout the film, brings a large network of people around to his way of thinking. He does this by yanking them out of their comfort zone, shaking them out of their complacency and making them realize that you are not defined by your job, or your condo, or your IKEA living room set.

Tyler Durden recreates the world in his own image. When Daddy grows up, he wants to be Tyler Durden.

When I first considered blogging about "Fight Club", my emphasis was going to be on how Tyler and his group dealt with the outside world. One of the best lines in the movie is where Tyler says to the Police Commissioner (who is at that moment, being held down on a bathroom floor with a knife pressed up against his family jewels - always a motivation to listen), "Look, the people you are after are the people you depend on. We cook your meals, we haul your trash, we connect your calls, we drive your ambulances. We guard you while you sleep.

To me, that pretty much sums up the current financial situation in our country. The Richies keep going after the Average Joe, taking his money, outsourcing his job to India, foreclosing on his house - all the while blind to the fact that Joe and the rest of the Average world keep the trains running on time. Now, with the housing market, GDP and consumer confidence in a tailspin, I think they might finally be starting to realize that yes - if you push us too far, it will cause those on the top to suffer as well. Indeed, best not to "fuck with us".

So, that was going to be the gist of this entry. But then I started thinking about Tyler Durden himself. Throughout this film, Tyler challenges our basic assumptions about our daily lives and the world in which we live. Not simply, "Are we winning in the game of Life?" which we regularly ask ourselves, but instead, "What does winning this particular game mean? Who made up the rules to this game? Why do we follow them? Is this really the game we want to be playing, in the way we're playing it?"

Tyler says, "The things you own end up owning you." If you're still paying 19% interest on that solar powered hot dog rotisserie and bun warmer that you just had to have, you know this is true.

Tyler says, "Reject the basic assumptions of civilization, especially the importance of material possessions." Why? See the above quote.

Tyler says, "You have to know the answer to this question! If you died right now, how would you feel about your life?" Socrates once said, "the unexamined life is not worth living", yet most of us think of this self examination in much the same way that we might think about a colonoscopy - a big pain in the ass is the main thought. But, like a colonoscopy, we're also secretly afraid of what we might find. Fear aside, it's worth thinking about.

And here's a quote attributed to Tyler that I honestly don't remember ever hearing in the movie, but it spoke to me (I was told later that this quote appears on the back of the DVD case, where you might expect to see the FBI warnings):

"Warning: If you are reading this then this warning is for you. Every word you read of this useless fine print is another second off your life. Don't you have other things to do? Is your life so empty that you honestly can't think of a better way to spend these moments? Or are you so impressed with authority that you give respect and credence to all that claim it? Do you read everything you're supposed to read? Do you think every thing you're supposed to think? Buy what you're told to want? Get out of your apartment. Meet a member of the opposite sex. Stop the excessive shopping and masturbation. Quit your job. Start a fight. Prove you're alive. If you don't claim your humanity you will become a statistic. You have been warned- Tyler. "

Do you know about Tyler Durden?


Note: Brad Pitt, along with being the face of Tyler Durden, is organizer of the Make it Right foundation, whose mission is the rebuilding of the lower 9th ward in New Orleans. Daddy has long been a supporter of their efforts and encourages everyone to do the same. Take a minute if you can and stop by the website - links are here and to the right http://www.makeitrightnola.org/.

Thanks for checking it out,