Daddy on the Edge of Fashion

Okay, qualifiers; men don't wear tights anymore. Unless you're a ballet dancer, or a circus performer...or you work at the Renaissance Fair...or you're the next contestant on RuPaul's Drag Race.

The thing is, men used to wear tights. From "Ezine"; "The origin of tights can be traced back to the Renaissance age. The wearing of tights became a fashion among the men, during the period of King Henry VIII of England. The men wore them to display their well-toned legs. These tight-fitting garments were originally developed as a costume for those riding on horseback. During the 16th and 17th centuries, European men popularly wore tights. "

And it didn't stop there. Though the popularity may have died down by the early 20th century, the film and comic book industries bedecked many of the typical boy's childhood heroes in tights. Knights of the Round Table, swashbucklers of the seas, Robin Hood and pretty much every superhero ever inked into a graphic novel sported a set of tights.

But did they wear these leggings with just any footwear? Robin Hood in clogs? Lancelot in sandals? Batman in Nike's? How about the boys from KISS? (I know, not movie stars or comic book legends, but childhood heroes to me nonetheless. Yeah, I know...we'll talk about my childhood another day, k?) Is Gene Simmons gonna rock out to "God of Thunder" in penny loafers? Nooooo....the footwear of choice for the man in tights? Boots.

And this is the thing - this is why I even thought about it in the first place. While doing my Christmas shopping, I could not help but notice that boots are back. Boots are soooo back. Everywhere you look, women are wearing skinny jeans and boots, or tights and boots, or leggings and boots...and these are some awesome boots. In my day, the girls I ran with wore a suede style on a lower heel, usually with fringe. This was especially popular in the Rocker Girl/Cannabis Chick set - I'm pretty sure Stevie Nicks and the ladies from Heart all owned pairs like that.

But 21st century footwear designers have gone above and beyond in the customization of the tall shoe, and have pimped their boots with everything from studs to jewels, buckles to beadwork, straps to snaps. They're showing Sheepskin Pugs, funky Uggs, thigh highs and low rise, even Vegan Boots - boots without the leather. I had never heard of such a thing and wondered how they were made. Well, finding the boots to buy are easy - finding out what they're made of takes a little more time, and Daddy was starting to spin some "Soylent Green" scenarios in his head ("They're making the boots...out of PEOPLE!"). Nothing so drastic, however - here's the scoop from "Vegetarian Star";

"Some leather-like boots are made from PVC, which isn’t very kind to the environment, as it contains chlorine, which produces a chemical called dioxin during the manufacturing process that’s been linked to ailments, like asthma. To get around this, the best ethical designers use PU, or Polyurethane, a gentler synthetic. There’s also polyester, which can be used in satin-looking materials."

But whatever the taste in boot, the unfortunate fact remains that this particular style of dress, tight fitting leggings of some sort and the myriad of boots to choose from, is pretty much only available to women. Oh, you can get boots in the men's section - cowboy and steel toe - that's all you need, right? Sure, that might be all I need. Dietarily speaking, in a pinch, all the nutrients I need to survive can be found in my own urine - that's all I need. Sometimes it's more about what you want.

And what I want is to no longer be limited by the seeming majority of men around me. I'm a medium guy in an XXL world and while I feel the pain of the overweight guy, I have a 29 inch waist - and I can't find a belt that fits. When I asked a sales clerk why they didn't have them he said to my face, "Men aren't that skinny" and recommended I try the boys section. Do you remember the belts you used to wear as a boy? Flimsy cardboard things? Well, you can have yourself a walk down memory lane anytime you like because those same crappy belts are in that same boys section. The belt I finally found for myself is a good quality, fairly nondescript black leather "Dockers" belt with equally innocuous silver buckle. It fits me, it was on sale, and I got it in the Misses section. Necessity being the mother of crossing gender boundaries, I'm okay with that.

My point is that tights and boots didn't go out of fashion so much as men could no longer fit the fashion. By and large, the number of men able to "show off their well toned legs" is dwindling. It would be easy, I guess, for the skinnier man to simply acquiesce, and resign himself to a lifetime of boat shoes, sweatpants and polo shirts, a series of loose fitting outfits and team colors, all the while doing his best to blend in to the woodwork as much as possible. Just wear the uniform, dude. The baggy, boring ass uniform.

There's more to life, at least to a guy's fashion life, than that. In a world that has given birth to the term "metrosexual" , surely we can take chances in our everyday wardrobe. We can step outside our comfort zone, try new styles, wear a color other than black, blue or grey, try throwing a hat on our heads that doesn't have a big NY stitched on the front (Hats!! I never even mentioned hats! Why do we not wear fedoras anymore?? Oh well, we'll save that for another entry.) All my life, I've idolized rock stars and superheroes and, while I may not have radioactive spider venom in my veins and I may not be able to jam on a screaming guitar like Eddie or Gene, I know for a fact that I've got the legs to pull off a pair of tights and some boots.

Maybe it's time I became my own superhero. 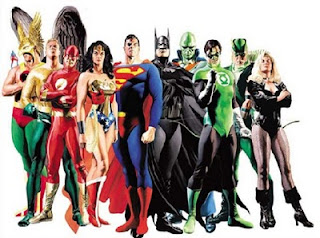