Daddy on the Edge of the Woods 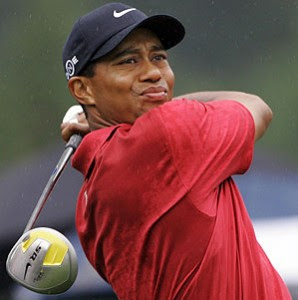 This entry is about Tiger Woods. The following is all I have to say about Mr. Woods and whatever he's currently going through in his personal life:


This space left intentionally blank on account of it's really none of my business.


Tea Baggers (tee hee) shout out, "Keep the government out of my health care!" (And even funnier, "Keep the government out of my Medicare!" which is like saying, "keep gays out of theater!" Sure; if all I want to see is "Up with People" and "I'm not Rappaport". Government created medicare, just as, it can be argued, gays created Broadway. Any way you look at it, removing them would be damaging - hence, the humor of the protest cry..but I digress WAY too much)

Pro-choice advocates cry out, "Keep your laws off my body!" The military policy on gays in their ranks? "Don't ask, don't tell". It seems the vast majority of Americans prefer the phrases, "Mind your own business" and "What happens in Vegas, stays in Vegas" to the phrase, "I know what you did last summer".

Why, oh why then, do we throw all that aside when we catch a fleeting glimpse of a celebrities dirty laundry on the line? "What I do in my bedroom is my business!", but when it's Tiger Woods that we're talking about, it's Larry King's business, and Katie Couric's business, it's Ernie Anastos' and Al Roker's, Bill O'Reilly and Sean Hannity's...hell, anyone with a microphone and a network...now, it's their business. And they are in the business of making Tiger's business...our business. Are we really such gossips? Do we really need the rush of watching the mighty fall to make us feel better about our own lives? People say the Tiger should publicly apologize. Um....for what? Did Tiger do something to the public at large that I am unaware of? Did he somehow violate me without my knowledge (which wouldn't be the first time something like that has happened to me, but not with him. At least...I don't think so....)? No; Tiger's crime is that he failed to live up to people's overblown, unrealistic expectations of him. He turned out to have (Gasp!) flaws. Well, I'm sorry folks, but I don't want anyone to apologize to me for being human.

Charles Barclay is famous for saying, "I am Not a role model" and he's right. "Role model" used to mean someone we could pattern our performance after - if we wanted the results they were getting, we would do what they do in that area of study and hopefully, excel accordingly. Somewhere along the way though, that got a little bit warped and we encompassed the entire person, with all his unavoidable foibles, into the "Role Model" equation. So now, if we want to perform like a certain athlete, in addition to working out like them, practicing like them, and studying like them, we might then decide to eat like them, use supplements like them, do drugs like them, sleep around like them, drink like them, get the same tattoos, wear the same clothes, drive the same car - til the term role model is no longer adequate, and should instead be replaced with the more appropriate term, "Original Copy". Modelling performance is one thing - trying to clone oneself into someone else's shoes is a recipe for eventual unhappiness. The Mighty do Fall; they fall back down to our level where, in some ways, they never really left at all.

Everyone, at some point in their lives, falls down. I guess the question is, do we point, jeer and laugh at them as they tumble, or do we attempt to afford them some decorum, and perhaps try to pretend that we didn't notice their stumble, or at least that it wasn't as embarrassing as they thought it was. And, if the opportunity presents itself, we can try to help them back up.

For now, I'm gonna make like I didn't notice.

PS: While writing this, I used the term, "Mind your own business" which always reminds me of the similar expression, "Mind your own beeswax". I've often wondered where that expression comes from, and if anyone knows, I'd appreciate the 411.

Someone who is great about discovering the origins of American idioms is a gal named Marina Orlova at Hotforwords.com. I found her on YouTube years ago; a Russian immigrant with a lexicon and a dream, she has parlayed her brains and beauty into a real "Coming to America" success story. Hmmm...you might even call her...a role model. ;)

Check her out - links to the right.