Daddy on the Edge of Party Lines

I'm reading about Joe Lieberman's latest snivelling antics and I am just going bleary eyed over the whole story (here, read for yourself; just click on the clown)- 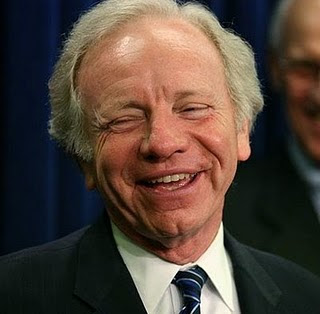 The gist of it, for those who just can't stomach reading a full article on Joe Joe the Frog Faced Boy, is that he's standing in the way of health care reform. Big frigging surprise. I guess Olympia Snowe made it look like fun. Well, let me ask you this, Lil Joe - if Olympia jumped off a bridge, would you? (My Lord, he looks like he's considering it - someone tell Olympia Snowe that Karl Rove told her to jump off a bridge - we can have a two for one day!)

When did this happen? When did a whiny senators grocery list of demands stand as an impenetrable wall against the nation's progress? Wait; whiny was the wrong word, and I knew this, but could not summon forth the proper word..until now. Petulant. That's the word I was looking for. Joe Lieberman is being a petulant little sissy boy.

Damn...that's just not fair to sissy boys, and I happen to have some dear friends of that persuasion...

Joe Lieberman is being a petulant weasel!
I know, I know - Daddy has a righteously firm grasp of the obvious. The point is, why do we let someone like that get away with anything at all? Because....wait for it...they might filibuster (egads, no! please, not that! oh Lord, anything but that! We tremble and quake in fear at the thought of your dreadful blustering filibustering!!!)

My goodness; what would we do? We've not seen such a potential filibuster fury since...hmmm...when was it? Oh yes! Since the Civil Rights Act of 1964. Yes, a group of lame brained senators decided to rail against that worthwhile cause as well. From Wiki;

"The bill came before the full Senate for debate on March 30, 1964 and the "Southern Bloc" of southern Senators led by Richard Russell (D-GA) launched a filibuster to prevent its passage. Said Russell: "We will resist to the bitter end any measure or any movement which would have a tendency to bring about social equality and intermingling and amalgamation of the races in our (Southern) states.""

Seems like politicians have a devil of a time accepting social equality, doesn't it? Whether you're talking about blacks, or gays (oh, Daddy's gonna talk about that - don't you worry), or just putting everyone on the same social standing health care wise, you've always gotta have some whack-a-moles that are just dead set against it. Weenies.

So, they filibustered. Carried on that nonsense for 54 days. While they were babbling, the bill was being further refined until they came up with a working bill that would get passage (sound familiar?). But credit where credit is due - "Key to the passage of the Civil Rights Act were not just the congressional maneuvers, but also the public pressure, which was fed by a campaign led by Dr. Robert Hayling and Dr. Martin Luther King in St. Augustine, Florida --the "nation's oldest city"--in the Spring and summer of 1964."

The National Association of Free Clinics goes around the country to our poorest areas. They set up their tents and supplies in vacant lots or empty fields, and basically provide free health care to as many people as they are humanly able to in the time that they are there. People line up the night before, and as many as 1,200 people might be waiting in line the next morning. Yeah, tell me we don't need health care reform. I've posted their link to the right. Click on them and check them out. Maybe donate. Maybe call and suggest that they help the poor in DC without health care, and that they do it right in front of Congress.

As for you, Lonesome Joe? You wanna filibuster? Go right ahead. I wanna hear you rail on about why Americans shouldn't have decent health care. I wanna hear you snivel through an explanation of how expanding Medicare was a great idea when you were running for VP, but now it's not rockin' your socks like it used to. Keep telling us how expanding medicare will drive up the debt and bankrupt the program, even though your accountants have now come out and said just the opposite. In the meantime, we'll just have to keep fighting, and figuring out how to dodge small, greedy minds like yours and maybe, just maybe, figure out a way to send you packing for good one day. Weasel.