Daddy on the Edge of Your Circle of Friends...

It's social media, for sure - but it's also a social experiment.  We have re-defined the word "friend" as basically anyone that we felt like including in our thoughts, or anyone who's thoughts we were curious about -  sometimes it's just uncomfortable not to friend someone, so you do. Like, you've known of the existence of your best buddy's ex-wife's sister for so long that, when she pops up in the "people you might know" box, you almost feel beholden to "friend" her.  She will often feel equally beholden to you, and she won't want to feel awkward or make you feel skeevy for asking, so she'll accept your friend request.  Congratulations - you have now entered each others worlds.

She now knows of your love of 70's sitcoms, Sarah McLachlan and flan.  You are now keenly aware of her passion for 12th century weaponry, the music of My Chemical Romance and the collected works of Stanley Kubrick (including "Eyes Wide Shut" - no, wait, you misread that...especially "Eyes Wide Shut"...oh dear).

Sometimes this comes as a sigh of relief.  You see that they've "liked" Rachel Maddow and you know that you can invite them to your hemp rally.  Or, conversely, maybe you see that they had prayed for a third Bush Term and you know you can proudly show them your "I Heart Cheney" underoos (which are doubly cute because the heart symbol is actually a picture of a pacemaker) - btw, I went looking for a picture of that in Google images, and all I could find was this - pretty damned close if you ask me; 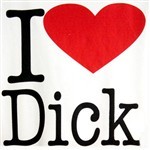 But I digress.  You learn about your friends' political views on Facebook, and you can now also see what your friends friends think about all things political, and that's when you start to feel like perhaps you're in a game of "Six Degrees of Fred Phelps".  Daddy is a left wing liberal - that's pretty damned obvious, and I make no secret of it.  As such, I expect a degree of debate and lately, am not at all surprised to see overtones of complete disdain for my opinions.  I'm good with that.  I mean obviously, I think my opinions make more sense than the conservative arguments, but while I heartily wish that the world at large would agree with me completely, I know that others on the opposing side of the discussion have equal conviction to their arguments, so universal group think is probably never gonna happen.  And that's probably a good thing.  Discussion is good.  Debate is good.  It is only through questioning that new answers are found; it is only by debating the old ways that new ways come into being.  A better Tomorrow is achieved by not being satisfied with Today.

However, if you cannot make your argument without resorting to lies, racism and baseless epithets, then I am going to assume that you're argument is not worth very much, if anything at all.  But hell - why even form an argument, when complete and utter disrespect can go so far?  Dave Hurtt, a Florence, MT resident spends $700 to build an outhouse on a trailer - he names it "The Obama Presidential Library" and brings it around to Republican Conventions.  It made an appearance in the Memorial Day Parade in Corvallis, a town in Montana and was also featured outside the Montana GOP convention and prior to that at their annual Lincoln-Reagan Luncheon.  Andy Griffith, American Icon, passes away and is vilified by the Right Wing, because he apparently was a supporter of Obama.  They're "glad this idiot is dead".  He's "another hollywood commie lib" - here's my fav, from someone who likes to call himself "godisangry" - "Griffin, like all other liberals who have (sic) die, is now in helll paying the high price for his support of Obama and other liberal causes".


That's how y'all talk about Sheriff Andy?  Damn...that's cold.


Now, I know what you're saying - they're not ALL like that...no, they're not.  Some of them just dole out the Socialist, Muslim Kenyan schtick; some of them openly declare that their number one mission is to make Obama a one term President and gleefully do their best to muck up the works.  But most of them take all of the failures, all of the epic disasters of the Bush Administration, lay them at Obama's feet and say, "It's all your fault."  It's a great way to wage an election battle, but it's a senseless way to debate the issues in a way that will benefit the country as a whole.

And that's the point...of fucking everything.  The Benefit of the Country as a WHOLE.  A rising tide lifts ALL ships.  A successful team beats with ONE heart.  Here's a favorite teamwork quote;


"Teamwork is the ability to work together toward a common vision.The ability to direct individual accomplishment toward organizational objectives.It is the fuel that allows common people to attain uncommon results."

That last quote is from Andrew Carnegie.  Andrew Carnegie came to this country from Scotland in 1848.  His first job was as a factory worker in a bobbin factory.  He went on to become the second richest man in history and one of the most important philanthropists of his era.  He was a man that could see how capitalism and the common good could work together in harmony; indeed, he viewed business as simply a means to an end, as a tool for the betterment of many, not as an endless quest to attain all of the worlds fortunes for himself.

I'm going to show you a video now. It's from 2009, but it's still relevant.  I think Andrew Carnegie would agree wholeheartedly with the content of this vid - in my opinion, it's a good, positive message, serving as a reminder that we're all in this together.  However, if you view this on YouTube and look at the comments section, you will of course see the Right Wing tearing the piece apart. Please, whether you're Right, Left, or anywhere in between - watch the video.  Then watch it again.  Take notes.  If you disagree with any of what's being said here, let me know in the comments section.  Tell me why.  Convince me that this is wrong - that what these people are saying is flawed and should not happen.  Do it with fact based realities, not right induced rhetoric or thinly veiled racism.  If your argument is strong, you should have no problem stating it like that.  If not, perhaps you should abandon your argument altogether.  Just a thought.  Watch the video;