Daddy on the Edge of a Smile

In the 1982 film "Diner" (which if you haven't seen you absolutely, positively HAVE TO SEE! - this, of course, has made me think about all the other films that you absolutely have to see, but I'll post that list another time. Trust me, though - you will not be disappointed).

Okay, I guess that was a stand alone sentence - let me try this again.  In the 1982 movie "Diner", Kevin Bacon has a catchphrase; you'll find him doing something that makes him happy, and he says; "It's a smile".  Not, "It makes me smile" but, "It's a smile" - activity and result have become one - cause and effect have merged.  I love that.

Daddy loves a good smile, and Daddy loves to share - so every once in a while, I'm gonna post a referral and ask you to visit, for a little while, someone that Daddy thinks is pretty cool; something that qualifies as "a smile" or, as Judy Jetson would say, is "the most ut". 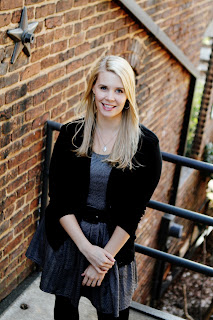 This woman is a smile.  Not because she's pretty (which she is); no, Daddy's got a whole house full of pretty ladies - you've gotta do a lot more than that to turn my head (especially since I've got this arthritic neck that makes it hard to turn my head - I really only do it on special occasions).  Jackson Pearce is funny, and witty; she knows her way around social commentary and is pretty darned handy with a screwdriver.

This is her formal bio (courtesy of http://jackson-pearce.com/ )


"Jackson Pearce lives in Atlanta, Georgia, with a slightly cross-eyed cat and a lot of secondhand furniture. She graduated from the University of Georgia with a degree in English and a minor in Philosophy. She auditioned for the circus once, but didn’t make it; other jobs she’s had include obituaries writer, biker bar waitress, and receptionist.


Jackson began writing when she got angry that the school librarian couldn’t tell her of a book that contained a smart girl, horses, baby animals, and magic. Her solution was to write the book herself when she was twelve. Her parents thought it was cute at first, but have grown steadily more concerned for her ever since.
Jackson is the author of a series of retold fairytales, including SISTERS RED,SWEETLY, and FATHOMLESS (Fall 2012), as well as two standalones, AS YOU WISH, and PURITY."
As you might have noticed from the bio, Jackson is not someone that would normally come across Daddy's radar (although I was nearly in the circus as well, but that is a story for another time).  So what brought me to her?  What made our stars align?

Yes, the home of waffle fries and a homophobic CEO.  I was thinking of commenting on the whole Chick-fil-A weirdness but luckily, Jackson Pearce beat me to it and said it better than Daddy could ever have imagined.

And so, without further ado, here is Jackson Pearce;

Thanks for being a smile,

PS:  To Jackson - I love that your electrical panel is labelled as well as it is, but I would always caution against trusting those labels and recommend the use of a voltage tester before attacking a light switch.  That said, as a licensed Home Improvement Contractor, I can say with authority that you are 100% correct - you do not need a penis to make repairs around your home.  And I'll never look at a Philips head screwdriver the same way again.  Thanks for that.   ;)
Posted by K at 8:18 PM