Daddy on the Edge of Aurora

All my life, the movie house has been a special, reverent place - a place of magic and possibility, illusion blending with reality, a place that seemed to contain within its walls the stuff from which dreams were made, at least for me.

And for that - for all of the victims of the tragedy in Aurora, I am truly sorry.

It's hard to know what to say - what to do in a time like this.  We can't really look to our elected leaders, since they're all up for re-election and no one wants to piss off the NRA.  I'm not sure why being against automatic weapons in a movie theater should piss off gun owners, but they seem to think that any speaking out against any type of guns is a direct assault on their Second Amendment rights.  Well, sorry guys - Daddy's not running for any office and I feel perfectly secure in using my First Amendment rights to call NRA leaders and lobbyists a bunch of fucking douche bags.  No one, aside from the military, needs to have semi-automatic weapons unless they intend to hurt a lot of people in a short amount of time.  These weapons were banned until you fuckheads got our pistol whipped government to roll over and repeal the ban.  Repealing that ban was truly a senseless act, and it begat another senseless act, in which many innocent lives were lost.  But hey - y'all get to play soldier with your M-16s now, right?  You fucking, fucking, fucktards.

Anyway, while we've had our share of villains in this story, we have also seen a hero or two.  Enter Batman. 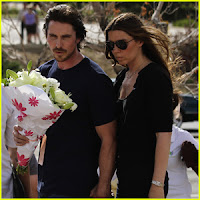 Christian Bale and his wife Sibi Blazic visited Aurora, first laying flowers at the makeshift memorial for the victims, then heading to The Medical Center of Aurora where they spent over two hours meeting with doctors, first responders and seven of the wounded.


He was not sent there by Warner Brothers.  There was no press conference.  He asked that the media not be informed of his visit.  In a world seemingly owned and operated by ulterior motive, Christian Bale decided to just do the right thing.

Here he is at the bedside of Carey Rottman, who was quick to post this photo to his Facebook page.  Shortly after the shooting, a Facebook campaign had been launched imploring Bale to go meet with  the victims.  I don't know if that was the impetus for his visit, or if he just decided to go on his own.  I'd like to think it was the latter, but either way - this is what a stand up guy looks like.  Congress - take note.


Carey Rottman was lucky enough to be awake and alert when Batman showed up in his room; Caleb Medley was not as fortunate. 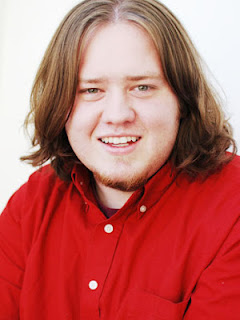 This is Caleb Medley.  Caleb was shot in the eye during Friday's shooting, and is currently in an induced coma.  His wife Katie, who was also at the theater but made it out uninjured, gave birth to their son Hugo in the same hospital on Tuesday.  Caleb has a tough road ahead of him, made tougher by the fact that his medical bills could run as high as $2 million...and he has no insurance.


"Medley’s story illustrates the dangers of remaining uninsured in America. The Affordable Care Act aims to help the ranks of that class, which has swelled for four straight years and is now approaching 50 million. The law, which the Supreme Court ruled constitutional last month, could extend health care coverage to up to 30 million uninsured Americans like Medley beginning in 2014.
As Medley's tragic story shows, going without health insurance can have stark consequences. About 26,000 Americans died prematurely in 2010 because they lacked health insurance, according to a recent report from Families USA.
In addition to lacking health insurance, rising costs have made it increasingly difficult for Americans to get access to health care. In 2010, Americans spent $2.6 trillion on medical care, a tenfold increase from 1980. That boost in cost pushed nearly 60 percent of Americans  put off or went without health care last year, according to a June report from the Kaiser Family foundation."

There's just so much wrong with this story, it's hard to imagine a happy ending - hard, but not impossible.

First off, if you want to donate to Caleb's medical bills, you can visit the donation website by clicking here .  I would ask - I would practically insist that if you are a card carrying member of the NRA, that you give verrrry generously.  It's the least you can do.

Second, let's talk about some rules and regs for a moment, shall we?  While discussing this subject, folks on the Facebook have trudged out the argument - if the killing had been done with a car, would we rush to outlaw driving?  At first, I argued that cars and guns are two very different things, but then I thought about it.  Perhaps we should treat them the same - as follows;
Like a car, you must be licensed to operate your weapon.
Like a car, you must pass a test showing that you know how to properly operate your weapon.
Like a car, you must register every weapon you own.
Like a car, you must have all your weapons inspected on a regular basis.
Like a car, you must carry insurance for each of your weapons and their subsequent use.
None of this would infringe on anyone's Second Amendment Rights, but there's a decent chance that it would make gun owners a little more responsible.  Does this do anything about illegal firearms?  Nope, but the shooting in Aurora was done with weapons that were all purchased legally. Well, I'm sorry - but we have to make it just a little more difficult to kill people - it's gotten way too fucking easy.
If you agree with me, call your Reps.  Call your Senators.  Call the White House.  Share this blog entry.  Tell a friend.  Give to Caleb Medley.  Do something, right now, to make things better.  Be the good guy in this movie. Be the hero -
Be Batman.