Daddy Still on the Edge of the Incredibly Obvious

I had too much to say about solar and was still bubbling over after my last post, so here's some more. 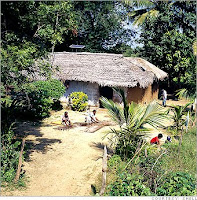 This is for all the folks that like to say, "We can't...it's tooo hard!

"It costs too much!"

This is an example of Solar power used in a rural domestic setting,
Meegaswewa Village, Sri Lanka.

On a slightly larger scale, here's a little something they whipped out in Taiwan (photo and story provided by guardian.co.uk);

Taiwan recently finished construction on an incredible solar-powered stadium that will generate 100% of its electricity from photovoltaic technology! Designed by Toyo Ito, the dragon-shaped 50,000 seat arena is clad in 8,844 solar panels that illuminate the track and field with 3,300 lux. The project will officially open later this year to welcome the 2009 World Games.

Building a new stadium is always a massive undertaking that requires millions of dollars, substantial physical labor, and a vast amount of electricity to keep it operating. Toyo Ito's design negates this energy drain with a stunning 14,155 sq meter solar roof that is able to provide enough energy to power the stadium's 3,300 lights and two jumbo vision screens. To illustrate the incredible power of this system, officials ran a test this January and found that it took just six minutes to power up the stadium's entire lighting system!

The stadium also integrates additional green features such as permeable paving and the extensive use of reusable, domestically made materials. Built upon a clear area of approximately 19 hectares, nearly 7 hectares has been reserved for the development of integrated public green spaces, bike paths, sports parks, and an ecological pond. Additionally, all of the plants occupying the area before construction were transplanted.

Non-sports fans in the community have a lot to jump up and down for as well. Not only does the solar system provide electricity during the games, but the surplus energy will also be sold during the non-game period. On days where the stadium is not being used, the Taiwanese government plans to feed the extra energy into the local grid, where it will meet almost 80% of the neighboring area's energy requirements. Overall, the stadium will generate 1.14 million KWh per year, preventing the release of 660 tons of carbon dioxide into atmosphere annually.

Cool, huh? Think they thought of doing that when they built the new Shea? Yeah...not so much, I'm afraid. Here's a post from another writer, who I think is totally brilliant (and not just because he thinks the same way I do). After I posted my last entry, I found this guys article, which not only solidifies my opinion, but offers other benefits to the Solar program I had described that hadn't occurred to me. This is the article as it appeared in altenergy.com, and I'm including a link to the mag in the links section on the right;

The Federal Government owns approximately 500,000 buildings, including the White House. A half million buildings; that's a lot of rooftop space. Because our Government is the country's single largest energy consumer, using 1.6% of all the power generated in our nation I recommend a "Solar Federal Buildings Program". The Program will cover as many of these rooftops as possible with solar-electric roof panels, substrates, roof-shingles and tiles.

Photovoltaic panels have no moving parts, make no noise, and create no emissions or chemical reactions. In addition, solar panels require virtually no maintenance and are guaranteed on average for 25 years. A Solar

Federal Buildings Program will create a massive supply of electricity--especially during peak hours--for many decades.

1. Secure Energy Supply for Federal Operations: In 2008, the U.S. government spent $24.5 billion on fuel and electricity. A federally-owned solar-electric infrastructure would cut that bill considerably while reducing our dependence on foreign sourced fuels. This program will help protect the power supply to federal operations during brownouts, blackouts and power interruptions.

More importantly, because government owned buildings will be supplying a significant portion of their own power needs during normal operating hours, the Federal Government will place a lower burden on local energy systems, especially during times of peak demand.

2. Stimulate Green Jobs and Industries: A Solar Federal Buildings Program will stimulate the growth of America's photovoltaic industries as well as create opportunities for installer-contractors in every locality. Additionally, the manufacture of parts needed to install photovoltaic equipment such as batteries, installation brackets, wiring, inverters, terminals and connectors will stimulate the creation of many thousands of additional green jobs. This program will also help to accelerate the domestic manufacture of electric vehicles.

3. Promote American Made Plug-In Vehicles: A Federally -owned nationwide solar-electric infrastructure could supply much of the electricity needed to power the Government's new fleet of American made plug-in electric cars, vans, trucks and buses. The savings in fuel costs will help to reduce the payback time on both the Government's photovoltaic installations and their fleet of electric vehicles.

4. Save Our Fresh Water Resources: Nuclear as well as coal, oil and gas-fired hydro-electric power plants all use enormous amounts of our nation's fresh water resources. A 2000 study found that power plants were the second largest user of our fresh water resources withdrawing 136 billion gallons a day. Only agriculture uses more water on a daily basis. In contrast, photovoltaics use no water in the generation of clean, renewable electricity! Under Executive Order 13514, signed by President Obama in October 2009, government agencies must implement a host of changes including a 26% improvement in water efficiency by 2020.

5. Reduce Operating and Maintenance Costs: Many rooftop solar-electric installations actually act to insulate the building below. For example, the FedEx Corporation installed a photovoltaic system at its Oakland International Airport hub and found that the solar panels helped to reduce their heating and cooling costs. In addition, large photovoltaic installations can shade and protect a rooftop from damaging ultra-violet radiation, slowing the need for rooftop maintenance or replacement.

6. Reduce Emissions and Slowing Climate Destabilization: Our nation is the world's second largest producer of greenhouse gases. A Solar Federal Buildings Program will dramatically reduce the government's consumption of fossil fuels, and thus, the production of greenhouse gases. On June 17, 2009, The Obama Administration released a new report, "Global Climate Change Impacts in the United States", which says that it is important to act now, rather than later, to minimize the impacts of climate destabilization.

I recommend that the Federal Government fund a study to evaluate the merits of a Solar Federal Buildings Program. By expanding solar energy production at such a comprehensive level, we will grow economically, gain technologically, and preserve our precious natural resources.

But I digress. Is the idea of panels simply too mundane? Want something creative, something nouveau, something fresh? Very well, alternative energy connoisseur! I give you solar balloons! Click the pic to read about them;

As mentioned in the article, "The design is also ideal for a multitude of off the grid applications, with the potential to bring power to deserts, isolated islands, ocean-bound freighters, and heavily forested landscapes. Additionally, the balloons’ eminently deployable nature makes them perfect for disaster and emergency situations, since the balloons are quick to set up and can be delivered via air."
So, one would imagine 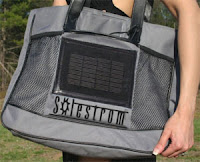 you could use these to power, say, an offshore oil rig? Oh, the irony.

I could, of course, go on..and on...and on. Solar collecting beach totes ( the SmartSwim Solar Charger Beach Tote), Solar swim suits (see the link in the links section), and, in keeping with our sand and surf theme, solar boats.

This is a rendering of PlanetSolar. It's a solar boat, and here's what they have planned for it;

PlanetSolar, the fully solar powered biggest boat is getting ready for circumnavigation of the globe in 2010. The Swiss based PlanetSolar is being designed and developed by an international team of physicists, engineers, boat builders and other people related to renewable energies and environmental protection by considering various parameters like: propulsion, solar panel design, energy storage, materials, boat’s hydro and aerodynamics and the external environment. Click on the pic if you'd like to know more.

PlanetSolar is probably the coolest boat I've ever seen. The only thing that would make it cooler is if it were being built in the USA. As hopeful as I am about solar and other alternative energies, I am equally dismayed that the United States is not leading the way in this endeavor. Countries both large and small are taking the initiative and, if we don't act soon, and decisively, we will lose out on a market that we could easily lead in.

The United States of America was once the greatest country in the world, and we can be again. But to all those who still blindly chant, "We're Number One!" let me just remind you that simply saying it doesn't make it true. We have to prove it, and I don't think we've been proving it for quite some time. Don't get Daddy wrong and think that I'm being unpatriotic. On the contrary, I'm being as patriotic as I know how to be. The United States has the opportunity to be greater than it's ever been; greater than any country could ever hope to be. We can lead the world into the next generation of Energy - into a safer, more efficient, simply better way of doing things.

We have this opportunity.

Let's not blow it,