Daddy on the Edge of the Incredibly Obvious

Hello. Yeah, it's been a while....
Not much, how 'bout you?
I'm not sure why I called,
I guess I really just wanted to talk to you...
Sorry - sometimes I get caught up in a good England Dan & John Ford Coley moment and I just have to see it through. If I am to be honest, it happens more than I care to admit...and don't even get me started on Manilow.

But I digress. It has been a while, and I've missed being here. I've had plenty that I've wanted to say, but little time to say it. Then I watched an oil rig blow up, and the Gulf Coast turned black, and I realized that enough time has been wasted already. Have I been asleep? Have I been sleeping? If so, then the disaster in the Gulf must serve as a wake up call; it must stand as a symbol of all that is wrong with the current way of doing things - not just in terms of meeting our energy requirements, but in the way we put profit above environment, politics above decency - Capitalism above Country.

After seeing pictures of the Gulf, and after weeks of the daily news telling me that they still haven't figured out a way to plug the damned pipe, and that the Gulf may not be totally cleaned up in my lifetime, I have to ask the obvious question - why are we not pursuing alternative energy as quickly and as aggressively as we possibly can?

Solar would seem to me to be the most obvious choice, so let's look at that for a minute. Now, I know what you're saying - "Daddy, you can't believe that the Sun is as powerful and dependable as an unknown quantity of crude filth buried miles underground that pollutes everything it touches, now can you??" Well, here's what altenergy.org has to say about the Sun;

"The sun, an average star, is a fusion reactor that has been burning over 4 billion years. It provides enough energy in one minute to supply the world's energy needs for one year. In one day, it provides more energy than our current population would consume in 27 years. In fact, 'The amount of solar radiation striking the earth over a three-day period is equivalent to the energy stored in all fossil energy sources.' "

reactor! 970 trillion KWH of energy come from the sun every day! Now, there will be some people that say, "Yeah well, what about when it's cloudy? Huh? Huh??" Re-read the above paragraph. In one day, the sun provides more energy than our current population would consume in 27 years. I don't think one cloudy day will screw with our bell curve all that much.

The real problem with solar is not the occasional non-sunny day - it is the expense. Solar panels are expensive to have installed on your home. I know that installing panels on my own home would cost just about as much as....as a VCR did in 1956. That price? $50,000.

That was the price of the Ampex VRX-1000, the first commercially successful videotape recorder. Due to high price tag, the machine could be afforded only by television networks and the largest independent stations. That was in 1956. Sony, Philips and others competed over the course of decades - building and advancing, tweaking and perfecting, til finally in the late 1970's we saw VCR's that the average consumer could afford. Today, you can buy a perfectly good VCR at a garage sale for $20, if that much.

Mass Markets mean mass production, which in the case of the VCR meant mass reduction in price. Solar panels can be built and installed for far less than the current market conditions. They can be and they should be, but unfortunately, they won't be without real demand.

So here's my suggestion. This is what I'd like to hear the newscasters say on my TV tomorrow;

In light of the BP disaster in the Gulf, the Federal Government will begin the process of purchasing and installing solar panels on every Federal, State and local government building in the US (monuments may be excluded). All solar panels and associated equipment must be purchased domestically. All installation contracts must be fairly bid on by domestic companies, and work must be completed by legal US citizens. Post offices, prisons, military bases, VFW halls, social security offices, rest stops, police stations, the DMV - any government building you can think of would have USA made and installed (good for the economy and the job market) solar panels producing their own power (good for national security) and feeding back any extra to the grid, thereby reducing every one's reliance on fossil fuel (good for the environment).

That would be Phase One. You would think this would be an easy sell - US manufacturing? Up. US job growth? Up. Reliance on foreign oil? Down. Amount of bird and sea life not drowning in deep water crude? Definitely Down. It's a winning proposition for nearly everyone and everything except for the oil conglomerates and everyone they own, which unfortunately would include many of our elected representatives. So this plan is not perfect, in that this plan does not offer politicians a backbone. It does not offer to repair their moral compass. And there's definitely a psychological aspect to it as well. Ask any prostitute and they'll tell you - it can be hard to leave your pimp. After all, he's taken care of you, and you know he loves you, and when you were young and you didn't know any better, you tried to run away and he messed you up real bad...'cause he didn't want you getting hurt out their in the big bad world. 'Cause he loves you that much! And you realized he was right, and now you stay with him and just do what he says, and everybody's happy.

Time to wake up, ladies. 'Cause you know that BP, Exxon and all the rest look at you the way a pimp looks at his whore - as a money making bitch. Now I know the American people don't have the same flash that your big oil pimp has - we don't drive the shiny cars and buy you all those nice things - but we know you're better than that. We know that you're not a two bit ninth avenue floozy - you're more like Julia Roberts in Pretty Woman. Will you let us be your Richard Gere? Or at least your Hector Elizondo? C'mon Vivian; save us right back.

I thought of wrapping this up right there - leave on the pithy 80's movie reference that half of the readers won't get. But I found something while searching for graphics that sewed this whole thing up with an irony and poetic justice that was sweeter than cotton candy.

As perfect as Phase One of my solar plan is, it does not address cost, which could admittedly be sizable. Unfortunately, in this political atmosphere, anyone who suggests spending money for the common good is branded a socialist and a communist and Glenn Beck gets to pull out all of his swastikas and Third Reich memorabilia and Michelle Bachman has a little mini orgasm and Sarah Palin winks - it just gets completely ridiculous. So selling the price tag on this thing could be tricky.

But what if...and I know it sounds pie in the sky...but what if we had someone...someone like a rich uncle that done us wrong, and now he owes us big time. Not to mention the fact that he's done a lot of people wrong and could use some "image enhancement". Seems like we could hit him up for a favor, doesn't it?

Well, from Fortune Magazine and its 2007 list of the 10 "Most Accountable" Companies, meet your rich uncle; 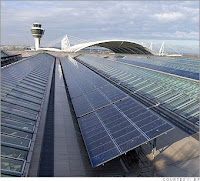 The world's second-biggest company reclaims the top spot on our list from Vodafone, the leader on last year's list. BP has led its industry in the research and development of wind, solar, and carbon-dioxide sequestration technologies. But new CEO Tony Hayward's core focus is getting new oil and gas projects online, like fields in Azerbaijan, Angola, Indonesia, and the Gulf of Mexico. That pleases shareholders and helps to lower prices for consumers through increased supply - a goal BP considers a core part of its social responsibility. Despite two years of major accidents - a pipeline spill in 2006 and a refinery explosion in 2005 - BP earned points for replacing several executives at those businesses.

So, here's how I see it - BP comes in and totally screws our coastline with antiquated fossil fuels? Fine; in addition to the monetary fines they'll be paying and the civil suits they'll be paying out on, they now have to provide us with enough solar panels to cover Phase One of America's new Solar Plan. Oh, and every commercial fisherman who's business has been affected by the oil gets free solar too, compliments of BP. Why? 'Cause ya should, that's why.