Daddy on the Edge of The American Dream

“So tonight you better stop and rebuild all your ruins, because peace and trust can win the day despite all your losing.” 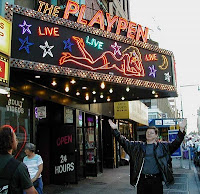 
It was a cesspool. Sure, you could find naked girls, throwing stars, at least two stores that advertised fake ID's - 42nd Street was a fourteen year old boys wet dream, but Disney it wasn't.


Not by a long shot.

This was no small feat. They'd been trying to turn this street around since before the Koch Administration. And in the "credit where credit is due" department, it was then Mayor Rudy Giuliani that finally made it happen.

t took an enormous effort, by an enormous amount of people, organizations and companies, to get this beast off the ground and make it a reality. More importantly, it took what I don't think previous efforts had - the belief that it could actually be done.

Belief. That's a hard thing to hold on to when you're looking down the barrel of the Midnight Cowboy set and trying to imagine Mary Poppins finding a home here, but they did.


I bring up 42nd Street because to many, it seemed like the impossible dream. I also bring it up because I watched it happen over the course of years; this amazing metamorphosis from bedraggled caterpillar to neon bejeweled butterfly. And I believe that this can be more of a common occurrence and less of a metropolitan miracle...if we believe that it can be.

There are once-great cities all over America that are dying a slow death. They decay and burn away; they rot and collapse before our eyes and take the dreams of generations with them. Meanwhile, the bottom lines dictate that we ship more jobs away, that we take more opportunity from our own citizens and ship them overseas because it helps a shareholder who is probably also overseas. I know it's easy for some to look at these dying cities and rationalize it away by saying that it's progress - that it's Darwin's Law applied to industry - only the strong survive. And that's always an easy thing for the strong to say. The problem is, if we continue down this path, it won't be long before other countries are looking at the whole of the United States of America, a dying country that shipped most of it's lifeblood overseas for a better bottom line, now struggling to keep itself alive. Do you think those strong will show us mercy? Will they lend us a hand? Or will they let us perish, as we ourselves let the weak perish before us? What happens if the USA is one day no longer "Too big to fail"?

Whether that could ever happen is, of course, debatable, but it is not my intent to sit and debate as the ancient Greeks, or the ancient Romans, or the Mayans or any other former superpower may have debated before they realized they were no longer top of the food chain. I come here not to argue; I come instead with ideas. Are they all good? Of course not. Are some of them impractical? Probably. That used to bother me. I used to care wayyyy too much about what other people thought, so I wouldn't offer my opinions or my thoughts for fear they weren't good enough. But I gotta tell ya - I've been looking at eight weeks of spewing oil that the best and the brightest haven't figured out a way to stop. One of their "best" ideas so far? Shove garbage and golf balls into it. Yeah...next to that brain trust, I don't have any problem presenting my crazy ideas on how to fix things.


Let's Build a City of the Future! 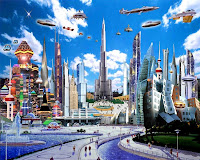 We talk a lot about alternative energy - solar, geothermal, wind and we see them occasionally here and there, but what if we just went nuts? What if we took a city and completely retrofitted it from head to toe with our best alternative energy and energy saving ideas - one city that we could make into a renewable energy metropolis? We could do it, y'know - we have the technology. We have the ability to make the world's first self-sustaining city...


Detroit, Michigan could be that city. 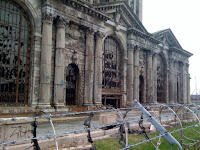 We could make it better than it was before. Better...Stronger...Faster. And yes, while I have gone a bit "Six Million Dollar Man", the idea still has merit.

The Motor City. The birthplace of Motown. Much has been said about Detroit - much of it derisive. Honestly, I myself have never been to the city, but I still know a fallen giant when I see one. And I know that giant can stand once more. The city I envision would be a technological breakthrough, showcasing all the best of renewable 21st century living. All of it's energy needs would come from solar, wind and water power. Hydroponics and organic gardening would supply it's food needs. New residential centers would be constructed that would do away with the need for cars, thereby greatly reducing emissions. People would come to New Detroit to study and participate in ongoing Research and Development in an effort to further streamline and improve renewable energies with the goal of making them a part of every community.

That is my dream.

Now, most of my friends will have no trouble telling you - that Daddy, he's a dreamer! Oh man, head in the clouds, that silly Daddy. And I guess they'd be right. Except, in this case, I'm in good company; the Crown Prince of Abu Dhabi is dreaming my dream as well. In researching for this entry, I came across a blog entry on poptech.org from about a year ago, written by Cordelia Newlin de Rojas. Check it;

There will be no flying cars or food replicators in the city of the future, nor any cheese-wheel shaped homes perched atop nimble legs. But don’t despair, for the city of the future is being built as we speak – behold the apple of my eye, the pearl of my oyster, where I live in my dreams: Masdar.

Masdar City is the cornerstone of His Highness Sheikh Mohamed bin Zayed Al Nahyan, The Crown Prince of Abu Dhabi’s brainchild, The Masdar Initiative. It is set to be the first carbon neutral zero waste city in the world.
This past week, Masdar has officially announced the connection of the first 10 Mega Watt photovoltaic power plant to Abu Dhabi’s grid. This PV plant, set over 55 acres and made of 87,777 panels is projected to provide 17500 MWh per annum. It will power the initiative’s temporary administrative facilities as well as the Masdar Institute of Science and Technology, devoted to the exploration of renewable energy, scheduled to open later this year.
Since this nation has built its fortune on a 20th century hydrocarbon economy, it shouldn’t come as any surprise that, unlike a persistent group of misguided souls, The Emirates’ leadership understands the very finite nature of fossil fuels. Anyone wishing to survive as a leader in the 21st century needs to be at the forefront of developing clean renewable energy and by launching this initiative, focused on pulling the best minds across different fields to work collaboratively on the challenges we face to power our future, UEA has done just that, setting itself up as the hub for research and innovation in this critical field.
And if that wasn’t enough, rumor has it that the PV plant was both built on time and within budget – now that is truly an accomplishment by anyone’s standards.

Pretty frigging amazing, huh? I'd like to remind everyone - these are the guys that sell us all the "foreign oil" that we're addicted to and can't live without. Apparently, they don't think it's quite as infinite a supply as we do. Perhaps we should follow their lead? Don'tcha think? Maybe? In any case, I'd like to thank the Crown Prince for helping me and my crazy dreams to feel vindicated.

In America, you can make your dreams come true. That's always been the mantra. But lately, if your American Dream revolves around getting off of fossil fuels, or making sure that you and your fellow citizens have decent health care, or leading the world in long term technology and advancement instead of short term greed and avarice, well - there's a big part of today's America that's gonna tell you you're an idiot. That your American Dream is stupid and that it can't happen. Well, I'll tell you what; you watch this video, and you take a good look at what the future looks like. That can be our future too; all we truly need is the belief that it can actually be done.

I had to fix a broken link for the video above and in doing so, found a video for Masdar City 2013.  It's not just a pie in the sky dream - they're making it happen.  Watch...