Daddy on the Edge of Giving 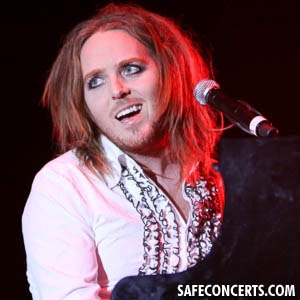 Tim Minchin wrote a Christmas song.  Well, no - Tim Minchin wrote a song about happenings occurring during the Christmas season, and clinically dissected the actual holiday and it's religious counterparts in his own Minchinesque fashion.  Minchin doesn't speak of Jesus as the miracle baby away in a manger; he does instead refer to him as "a dead Palestinian press-ganged into selling Playstations and beer"...

It's one of my favorite Christmas songs.

Not because it bashes organized religion, but because, once you get past all that, the song reminds us that - dogma and commercialization aside - the holiday season is really about two things -  love and family.

I was gonna start sermonizing here, but I'm stopping myself.  That's not my place (although Daddy is an ordained Minister. Just throwing that out there; y'know, in case anyone reading this wants to be married by a blogger).  Daddy's trying to remember that he too is a flawed human being and that his horse is not, and should not be, any higher than anyone else's.

But I've gotta say; as the holiday season approaches, I'm more than a little depressed and just a little bit pissed at some of the things I see on my screen lately.  We're getting ready to celebrate the birth of our Lord Jesus Christ, who taught us in countless Bible verses and parables to love one another and to help the less fortunate among us.

So, what better way to ring in the holiday than by busting a Priest, a Minister and a Samaritan for feeding the homeless?

But yeah - that's what happened.  The City Commission of Ft. Lauderdale (henceforth known as "The Dickhead Squad"), passed an ordinance in October making it actually very difficult for Mark Sims (the Priest), Dwayne Black (the Pastor) and 90 year old Arnold Abbott (the Samaritan) to feed the homeless without getting arrested. 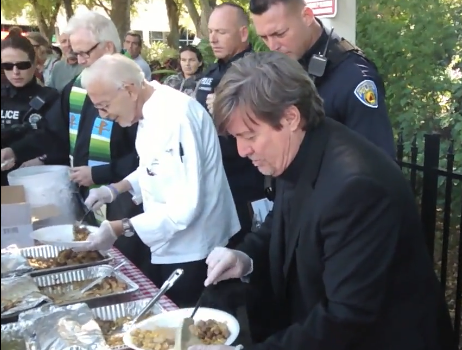 So they did it anyway.

And they got arrested.

Okay - they weren't actually taken to jail - they were cited and ordered to court.  If they don't show, then they'll be taken to jail.  If they do show, I imagine they'll be fined.  'Cuz you don't want to encourage this whole helping those less fortunate, right?  Gotta shut that right down - after all, this is 2014 Ft. Lauderdale, not 33 AD Jerusalem - got it??

Damn - Who Would Jesus Call a Weenie?

Sitting in church as a kid, this is what I was taught - you help those less fortunate than you, you stand up for injustice, you are your brother's keeper -

These men were feeding hungry people.  What could be more right?  Feeding the hungry - that was in Jesus' Top Ten!  Calling this a crime stuns and saddens me - and saying that feeding someone who is hungry helps "keep them in that cycle of homelessness" (as Ft. Lauderdale Mayor Jack Seiler said) is horseshit of the highest order.  Of course, the idea behind such thinking is that if you stop feeding them, they'll go away, which is just Pez-head logic.  Here's a crazy idea - maybe, instead of arresting the Samaritans trying to help the hungry, maybe the local government could try to help the hungry as well.  Maybe, instead of passing new laws to make life tougher on people that are already living on the fucking streets, the community can try to think outside the box, and search for solutions to help people up instead of knocking them further down.


Maybe they could stop giving out tickets and start giving a shit about their fellow man.

Damn.  I preached anyway, didn't I?  Yeah, sorry - now meekly climbing off of my high horse (which is only slightly higher because we climbed up on my soap box) and getting back to the original point -

Tim Minchin wrote a Christmas song.  And, if you buy this song from iTunes from November to January, all proceeds will go to The National Autistic Society, which provides support, information and services for people with autism and their families and campaigns for "a better world for people with autism".

So, you can help some people and not get arrested.  And you can hear what is really quite a beautiful song.  Click here to see the many ways you can purchase the tune.  Also, if  you would like to support the work of 90 year old Samaritan Arnold Abbott, you can click on the following link and contribute to Love Thy Neighbor.

And one more thing - I'd like to ask a favor.  In the spirit of the season, I'd love for you to give me your favorite quotes on the subject of giving.  Just googling "quotes on giving" provides tons of resources to some really wonderful quotes - please post your fav in the comments section.  Here's one that I really liked -

“Giving does not only precede receiving; it is the reason for it. It is in giving that we receive.” ― Israelmore Ayivor

And now, without further ado, I give you Tim Minchin...


Thank you so much,