Daddy on the Edge of Using Your Words

Everlast - "What It's Like".  Pretty moving song. Of course, this is the first time I've actually heard it all the way through without half of the words squelched out (squelching is my word for what we used to call bleeping, or censoring - they mask the lyric with a rap record "scratching" sound).  Some of the words they squelch are predictable - "fuckin'" and "shit" are still pretty de riguer in radio land.  They censor the word "balls" (as in testicles), but I think that's only because the lyric refers to cutting them off.  The word "whore" is censored from this song on many radio stations, but to my knowledge, has not been removed from any printings of The Holy Bible. Come to think of it, the Bible also mentions eunuchs a couple of times, which are guys that operate sans balls.  There's even talk that marijuana (or "green") is mentioned in the Old and New Testaments - (you can click over to here to read about that.)  Pretty funny that American radio's standards of decency are more stringent than...well...God's.  But then, America and God haven't always been in perfect harmony on everything - America gets their panties all up in a wad because someone says "shit", but they let a lot of things slide - often going out of their way to broadcast and re-broadcast them in a 24 hour news cycle - yet I'm pretty sure that God would never approve of backwoods, hee-haw, hatespeak shit like this:

"If you would STOP worshiping false gods,
being a fag would not be a complex matter."

I don't even pretend to understand that last one.  But yeah...in case you haven't guessed by now, Daddy's 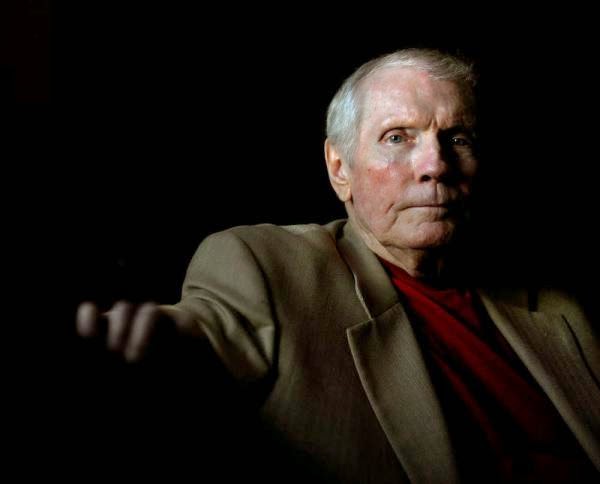 talkin' about the Douchebag du jour, The Reverend Fred Phelps.  He's said far worse than this, but even Daddy's got standards, and frankly, the only reason that I'm even talking about this whack-a-mole is because I'm growing exceedingly pissed off with America's double standard when it comes to what can and cannot be said in our country, and Freddy is a real popular poster boy right now.

In Fred's world, God hates me.  God hates you, too.  According to Fred, God hates pretty much everyone who isn't Fred or Fred's family.  But do you wanna hear something funny?  The Westboro Baptist Church, which Fred Phelps founded and which is made up mostly of Phelps' extended family...excommunicated him.

Yeah...they kicked his ass out last summer.  You may think that God hates us Fred, but we've got some pretty strong evidence that your family, your church - hell, pretty much your entire world - isn't too crazy about you, either.

That's not to say that you haven't done some good in this world, Reverend.  Your vile, disrespectful behavior toward your fellow men has inspired a Federal law and laws in numerous states limiting picketing at funerals.  Granted, I don't think we ever needed such laws before you came along, but I imagine they're good to have now that you've made picketing the dead so hip.  On the other hand, the Supreme Court did rule that your church and it's members couldn't be sued for monetary damages for inflicting pain on grieving families under the first amendment.

Dude can't sing about ganja but a hate group can purposely make grieving families suffer even more than they already were, ridiculing their fallen family members as a part of some macabre, hillbilly circus - without fear of litigation. What a frigging First Amendment triumph.

It seems like the role of censorship is to shield the innocents (read children) from things that may be harmful to them.  Well, it may make me a bad parent, but Daddy's kids have heard some four letter words in this house. They will also learn about drugs - what they are and what they can do - because knowledge is power.  Hearing these words, knowing about these things isn't harmful.  Hate speak is harmful.  Fanning the flames of hate is harmful.  Hate has done more evil, has destroyed more lives than the word Fuck or Shit or any other "profanity" ever possibly could.  And, in this case, Phelps and his flock have named The Creator as an accomplice to their Hate.  You wanna talk about using God's name in vain?  Censor That.

We're hearing now that the Reverend may not be long for this world, and Daddy's been trying to put himself in a right way about that.  If Fred Phelps has taught me anything, he has taught me that it is not right to express joy at a death.  I am not happy that this man is dying. I also hope that no one decides to picket his funeral - poetic justice aside, it is (as we know all too well) a disrespectful act, but more importantly - it would only serve to give this man the attention that he has so desperately craved throughout his existence on this planet.  Denying him that is the true Justice.  Let us leave him alone - completely, totally, utterly alone - and pray that, when he does leave this plane, that some of the hate that he has fostered over the years leaves with him.  We have had quite enough of it.

As I mentioned at the start of this piece, the Everlast song is highly squelched, because the lead singer cursed and talked about drugs.  And yet, there's a song that came decades before - a song who's poetic turn of a phrase managed to rarely get censored, despite the fact that it talks about transsexuality, drugs, male prostitution and oral sex.  I can think of no better farewell  to Reverend Fred Phelps than to dedicate this other First Amendment triumph to him.

Freddy baby, this one's for you...