Daddy on the Edge of the Voice of God

I don't usually listen to NPR.

Not that I have a problem with the station; on the contrary, I don't think the world gets enough intelligent humor and commentary anymore aside from Frasier re-runs, Bill Maher, and Dennis Miller (y'know,

before he became an asshole).

But I took my wife's car to go and pick up milk, and it was on her radio.  For whatever reason, I did not automatically change it to the classic rock station, and instead found myself listening to a story so compelling that even now, weeks later, it's still very much on my mind (and Daddy has always got a world of troubles on his mind - you have really got to rate to get that much play on my mental big screen).

It was a story about a man named James Hampton.  Born in 1909 in Elloree, SC to a self-ordained minister and his wife.  The father left his wife and children to "follow his calling" and at age 19, James left home as well, travelling to Washington, DC where he stayed with his brother's family, and found employment as a short order cook.  In 1942, he was drafted into WW2 and served in the Pacific as a carpenter.  In 1945, he was honorably discharged, moved to a boarding house back in DC, and started working for the General Services Administration as a janitor.  In 1964, he died of cancer.

Yeah, hardly.  If you were trying to script a more mundane existence, you probably couldn't do much better than the apparent life of one James Hampton.  Couple of things distinguish James Hampton from the least interesting man in the world.  First, he believed that God had appeared to him as a real person in real life.  Second, God told him to build this - 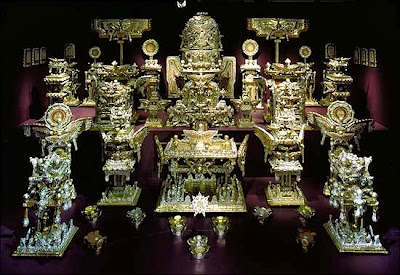 In 1950, James Hampton rented out an old stable building behind 1133 7th Street NW and, for the next 14 years, worked diligently for four to five hours a night after having gotten off his job at the GSA at midnight.  Every night, for 14 years he toiled in service to his Lord on this creation - and by all accounts, he still had more to do when he died.

This incredible, glittering tribute to The Creator, consists of little more than cardboard and broken furniture pieces, foil and jelly jars, desk blotters and burned out light bulbs.  Mr. Hampton would tour the streets, back alleys and used furniture shops of his neighborhood, looking for materials - one man's trash that he could transform into a holy treasure. Upon his passing, the doors to the stable building were opened, and his creation was revealed.

It is called "The Throne of the Third Heaven of the Nations' Millennium General Assembly".  It was the name that got me - it sounded like something out of a Terry Gilliam movie, but you knew it was not - that it held a much deeper meaning than could be understood by the uninitiated, by those not members of Mr. Hampton's inner sanctum - by those of us who hadn't spoken with God.  James Hampton had an extreme internal communication with the Almighty.  In his writings, he referred to himself as St. James (more specifically, "St. James, Director for Special Projects for the State of Eternity"), and recalled being blessed by visitations from God and angels alike during his time on earth - indeed, he believed that God visited the stable building regularly to direct him in The Thrones fabrication.

It was St. James' hope that The Throne would be recognized by religious leaders and that it, and he, would find their rightful places within the church structure.  That reality was not meant to be.  Instead, James Hampton died of cancer and The Throne of the Third Heaven of the Nations' Millennium General Assembly found its way to the American Folk Art Division of the Smithsonian Museum .

From the Smithsonian American Art Museum -

"Where there is no vision, the people perish" — Proverbs 29:18 (King James Version)
posted on the wall of Hampton's garage
James Hampton's entire artistic output is this single work which he called The Throne of the Third Heaven of the Nations' Millennium General Assembly. Hampton worked for more than fourteen years on his masterwork in a rented garage, transforming its drab interior into a heavenly vision, as he prepared for the return of Christ to earth. The Throne is his attempt to create a spiritual environment that could only have been made as the result of a passionate and highly personal religious faith.
Hampton's full creation consists of 180 components—only a portion of which are on view. The total work suggests a chancel complete with altar, a throne, offertory tables, pulpits, mercy seats, and other obscure objects of Hampton's own invention. His work also includes plaques, tags, and notebooks bearing a secret writing system which has yet to be, and may never be, deciphered.
Hampton's intricate, large-scale design for The Throne derives coherence from parallel rows of constructions, densely packed on several levels. A seven-foot tall cushioned throne at the rear center is the work's focal point. Pairs of objects on either side of it impart a powerful, compulsive sense of symmetry. To the actual throne's right, objects refer to the New Testament and Jesus; to the left, the Old Testament and Moses, a division that corresponds to the disposition of the saved in the Bible. Every item has a relationship to the others and most bear a dedication to a saint, prophet, or other biblical character that may have appeared in the recurrent visions that inspired Hampton's efforts.
Massive wings, suggesting angels, sprout from most components; framed tablets line the walls, and crowns and other complex foil decorations fill every available space of the assemblage. The entire complex was originally placed on a three-foot tall platform set stage like against the rear wall of his garage.
The Throne and all of its associated components are made from discarded materials and found objects consisting of old furniture, wooden planks and supports, cardboard cutouts, scraps of insulation board, discarded light bulbs, jelly glasses, hollow cardboard cylinders, Kraft paper, desk blotters, mirror fragments and electrical cables and a variety of other "found objects," all scavenged from second-hand shops, the streets, or the federal office buildings in which he worked. To complete each element, Hampton used shimmering metallic foils and brilliant purple paper (now faded to tan) to evoke spiritual awe and splendor. Hampton's symbolism extended even to his choice of materials such as light bulbs, which represent God as the light of the world.
Praised as America's greatest work of visionary art, Hampton's Throne reveals one man's faith in God as well as his hope for salvation. Although Hampton did not live to initiate a public ministry, the capping phrase "FEAR NOT" summarizes his project's universally eloquent message.
Exhibition Label, Smithsonian American Art Museum, 2006

When Meyer Wertlieb, landlord of the old stable building behind 1133 7th St. NW, opened the doors on the space following Hampton's death, he could scarcely believe what he saw.  He contacted Hampton's sister, and when she decided not to take possession of her brothers' creation, he reached out to the press.  “You can’t just destroy something a man devoted himself to for 14 years,” he told a Washington Post reporter.  ”It seems to be an example of the futility of life.”

I guess that all depends on your definition of "life".

Tony Robbins once said, "Your life is either a shining example or a cautionary tale".  Now, there's no doubt 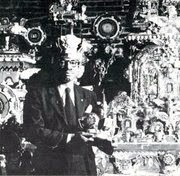 that, under the rules of the Corporate Ladder, Married with Kids, Good Old American Dream, the life of James Hampton is indeed a cautionary tale - you don't want to grow up to be like Mr. Hampton, a poor, solitary man surviving on a meager salary in a nowhere job - a life practically devoid of material rewards.  However, in the spiritual sense, what could the life of St. James the Janitor be but a shining example?  Where one could complain, he sought to rejoice.  Where one could resent, he sought to honor.  When God give James trash, James made for Him a treasure.

Albert Einstein said, "Reality is merely an illusion, albeit a very persistent one."  Easy to call a man like James Hampton crazy when he doesn't follow our version of reality - but when it occurs to us that we spend the majority of our waking life chasing scraps of wealth, laboring to make other people's dreams come true, driven by an almost compulsive need to purchase, to consume, to spend and that we call that "normal"; well then, perhaps his existence was much more worthwhile, much more fulfilling than our traditional, "normal" one.

What might happen?  If we listened, if we opened our ears to the suggestions of a Higher Power, if we allowed ourselves to be blown by the winds of Our Creator?  It's hard to imagine, largely because of the fears that society has lodged into our psyches - fears that say trying and failing at anything new would be horrible and is best not pursued, that taking time from your work to instead pursue your joy will leave you starving and broke, that diverting from what the majority refers to as normal will cause you great shame and suffering - so many fears, most of which revolve around other people and what they think of someone who no longer wishes to participate in their particular illusion of their particular reality.

If James Hampton considered any of those fears, they were apparently quickly forgotten.  St. James was doing the work of  God. Perhaps it was that higher calling, or of course direct direction from the Almighty, that had him crown the throne chair with the words, "Fear Not".  We must not fear the persistent illusion; we should, instead, let ourselves faithfully fall into the arms of serendipity, and open our sails to the winds of destiny. 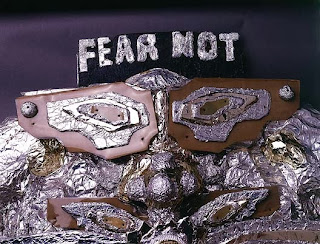 I was planning on wrapping this entry with the video to The Fray song, "You Found Me" ("I found God, on the corner of First and Amistad..."), but fell into this happy coincidence when a friend posted the following video on Facebook.  Moments of divine intervention aren't always monumental, and they certainly aren't rare...if we open our eyes, our ears and our hearts to them.  Watch -

"When the solution is simple, God is answering." - Albert Einstein