Daddy on the Edge of Celluloid Heroes 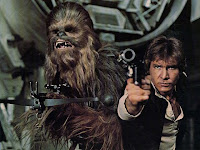 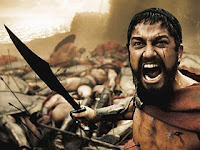 It's the movies that have really been running things in America ever since they were invented. They show you what to do, how to do it, when to do it, how to feel about it, and how to look how you feel about it.

In the film "Grand Canyon", Steve Martin says to Kevin Kline; “That’s part of your problem, you haven’t seen enough movies. All of life’s riddles are answered in the movies.”

They say that those who don't remember the past are doomed to repeat it. As we watch the world teeter over the third rail of a worldwide Depression, Daddy can't help but agree with that statement as well. But this post is not about history...this post is about the movies.

When reality gets to be too much, we seek solace in darkened theaters, where we watch the larger than life perform larger than life feats. Everything is just...better in the movies. They do things better, they definitely say things better...maybe if life were scripted, had multiple re-takes and a multi-million dollar budget, it would be better too.

But maybe movie heroes aren't larger than life; maybe, instead, it's that life has somehow gotten smaller. I don't know about you, but lately Daddy has felt more than a little restricted and constricted by a hamfisted system that stirs fears about inflation, stagflation, deflation, while all the while Wall Street fat cats demand de-regulation. Tiny people having tiny arguments about tiny things, while Rome burns. That's sad. That's small.

Somehow though, we can manage to leave all that puny pettiness at the theater lobby doors. When we see our better angels take shape on the screen, and say the words and do the deeds that inspire us to be better people, we don't sneer at them and mutter "Damned Socialist". Was Mr. Smith a Socialist? Was Rocky Balboa? Did Neo and Trinity stand with the 99%? Damned skippy.

Need a break from the idiocy spewing from the word-holes of our elected officials? Here; cleanse your palate. Watch this -

(Y'know, I've watched that clip about ten times while writing this post, and it still gets to me...every time.)

Daddy had many, many cinematic role models in his life, from Pale Rider to Han Solo, Batman to Braveheart, Superman to Schindler - the movies led by example, showing their audiences what true potential realized could look like.

And yet, Oskar Schindler - real life hero. William Wallace - flesh and blood, just like you and I. Maybe that's a part of it as well - maybe movies don't just show us what we could be - sometimes they remind us of what our ancestors were capable of, what superhuman feats they accomplished to get us where we are today.


As I said, I've had many movie heroes, but honestly - Charlie Chaplin was never one of them.

Over seventy years ago, Chaplin made a film called "The Great Dictator", in which he gave one of the greatest speeches I have ever heard. Special thanks to The Lakey Sisters, who uploaded this video to their YouTube channel, and I assume are responsible for editing the amazing visuals and music (song - Window by the Album Leaf). It's a speech that, seven decades later, is as relevant as when it was first heard...maybe even more so.

Today, thousands of Americans are moving their money out of major financial institutions as a protest of the current system and an insistence for real, formative change. Today, throngs of American citizens still stand strong in Zucotti Park as the 99%, and have inspired similar actions throughout the country...and the world. Tonight is Guy Fawkes night. Say what you will about Guy Fawkes - vilify him as a terrorist who tried to destroy a King; celebrate him as a freedom fighter trying to take down a corrupt government - either way you look at it, it's been 406 years since the Gunpowder Plot, and we're still talking about the dude today.

Daddy is dedicating this vid to the 99%, and to everyone who attempts, in any way, to be larger than life.

The Kingdom of God is within us. Our Better Angels are waiting.

Time to be Larger Than Life,