Daddy on the Edge of Jesus, Muhammad and The Common Good

"This is the rule of most perfect Christianity, its most exact definition, its highest point, namely, the seeking of the"common good". . . for nothing can so make a person an imitator of Christ as caring for his neighbors.” ~John Chrysostom

Did'ja know that Daddy is an ordained Minister? 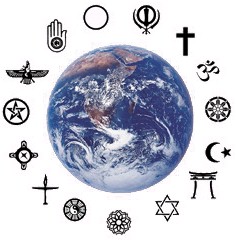 Yep - signed, sealed and delivered us from evil honest to God fearing Man of the Cloth, courtesy of The Universal Life Church Monastery.  I also signed The Big Book in NYC (seriously - no joke - it's this massive, leather bound tome that they pull out and have you sign - this after you've been sitting in the main waiting area of City Hall, listening for your name to be called and watching couple after couple coming in to get married - the whole afternoon was like some sort of college film, but I think I can say quite honestly that it was the best time I have ever had in a government building), which means I am able to marry people in Manhattan and all the Five Boroughs.  What could be better than having Daddy on the Edge officiate at your wedding?  Well this, for starters... 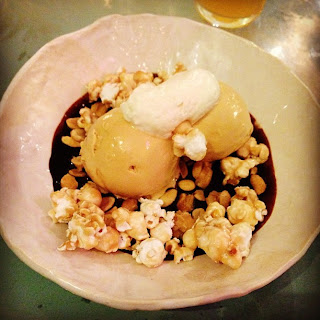 This is salted caramel ice cream, hot fudge, peanuts and caramel corn.  The creator of this concoction, Felicia Day, calls it a Cracker Jack Sundae.  It is delicious sounding, decadent looking, and it is consuming most of my thoughts this evening.  This needs to find a way into Daddy's mouth by the end of the week or bad things may occur. I might even accept this as payment for performing your wedding ceremony - that's how badly I want this thing.  Will marry for food?  I might, rabbit...I might.

But I digress (ya think???).  Salted caramel ice cream and all the fixin's is not the topic of today's foray into Daddy's brain.  Today, Minister Daddy, (nah...Papa Padre?  Father Father?  Eh, screw it) - today, I want to talk about The New Testament, The Qur'an, and The Torah.

I'll take "Religious Best Sellers" for $1,000, Alex!  Yep, these are three of the big boys - the play books, the instruction manuals, the veritable "eHows" for being the best darned Christian, or Muslim, or Jew you can be.  Throughout the centuries, they have been used to highlight our differences (usually to point out how one is so much better than the other two), but Preacher Pop (still not quite right...) is looking to focus for just a moment on one of the similarities of these three Holy Books - one of the main, central tenets that they all share -

2 Corinthians 9:7 - Every man according as he purposeth in his heart, so let him give; not grudgingly, or of necessity: for God loveth a cheerful giver.

Deuteronomy 15:7 - If there is a poor man among your brothers in any of the towns of the land that the LORD your God is giving you, do not be hardhearted or tightfisted toward your poor brother.

The Noble Qur'an -By no means shall you attain to righteousness until you spend (benevolently) out of what you love; and whatever thing you spend, Allah surely knows it. (3:92)

Mark 10:21 - Jesus looked at him and loved him. "One thing you lack," he said. "Go, sell everything you have and give to the poor, and you will have treasure in heaven. Then come, follow me.

Leviticus 25:35 - If one of your countrymen becomes poor and is unable to support himself among you, help him as you would an alien or a temporary resident, so he can continue to live among you.

We could be here all day highlighting how religions share a common belief in the importance of charity to their spirituality.  I've touched on three, but Hinduism practices a "daily morality" based on Karma and Dharma, Buddhism says that there must be joy in every act of giving, the Sikh Guru Amar Das says, "Blessed is the godly person and the riches they possess because they can be used for charitable purposes and to give happiness."  - On and on and on.  I've saved this one for last, because I thought it was excellent -

The Prophet Muhammad said: 'Charity is a necessity for every Muslim.'

He was asked: 'What if a person has nothing?'

The Prophet replied: 'He should work with his own hands for his benefit and then give something out of such earnings in charity.'

The Companions asked: 'What if he is not able to work?'

The Prophet said: 'He should help poor and needy persons.'

The Companions further asked 'What if he cannot do even that?'

The Prophet said 'He should urge others to do the good.'

The Companions said 'What if he lacks that also?'

The Prophet said 'He should hold himself from doing evil. That is also charity.'

If you can't do anything good, at least stop yourself from doing evil.  That is also charity.  Congress could learn a lot from the Prophet Muhammad.

Day after day, I hear a growing number of our legislators and lawmakers calling for this to be a Judeo-Christian Nation, a nation that embraces Christianity - truly, One Nation Under God (the GOP God, of course - kinda looks like a cross between Charlton Heston and Jerry Garcia - loves assault rifles, hates gays...surprisingly runs hot and cold on Ted Nugent.)  But their words and their actions don't match.

From the book of James - "What good is it, my brothers, if someone says he has faith but does not have works? Can that faith save him? If a brother or sister is poorly clothed and lacking in daily food, and one of you says to them, “Go in peace, be warmed and filled,” without giving them the things needed for the body, what good is that? So also faith by itself, if it does not have works, is dead. But someone will say, “You have faith and I have works.” Show me your faith apart from your works, and I will show you my faith by my works. ..."

What do the latest "works" of Congress, specifically that God fearing, Jesus loving Right Wing of Congress - show us?  Attempting to restrict voter rights, cutting food programs for the poor, refusing to raise an anemic minimum wage, countless campaigns and measures unleashed daily for the seemingly sole purpose of  hurting the least of us.  That's not Christ talking, that's someone else.  Please, please show me one bill, one proposal that has been suggested by anyone in the GOP that could even be considered the least bit "Christlike".  I'm here to tell ya, they don't exist.

Meanwhile, the folks that we have been told to revile; well now - they seem to be walking the path of the righteous a lot easier than the self-righteous whack-a-moles of Congress.

Compare and contrast with me for a moment, willya?  While House Republicans recently proposed cuts to nutrition assistance that will kick 280,000 low income children off automatic enrollment in the Free School Lunch and Breakfast Program, The Imperial Court of New York 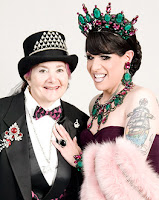 was hosting the 27th annual Night of a Thousand Gowns, a gala fundraiser, this year raising funds for GMHC and GLAAD.  In their history, the court has donated over a million dollars to worthy LGBT and HIV/AIDS related causes.  Seems that crossdressers, drag queens and "sodomites" (as many a Republican has referred to my gay brothers) are being a whole lot more "Christian" than all you good, morally bankrupt upstanding GOP mothers. (PS:  The folks on the right are newly crowned Emperor XXII Wen-Dee Bouvier Pinkhouse and Empress XXVII Gracie Steeles - word is the house was royally rocked at their coronation, and all of us here at Daddy on the Edge wish them a most epic reign. Link to ICNY will be on the sidebar - go get involved and be frigging fabulous!).

Here's another one - while Paul Ryan and his holier than thou GOP Cabal are still trying to cut $1.4 trillion from Medicaid over a ten year period (way to sock it to those "takers", Paul Ryan, you Social Security Recipient you) prison inmates in various correctional facilities were helping charities through several different methods.  At The Valley State Prison for Women in Chowchilla, CA, a group of inmates known as "The Longtermers Association" has raised and donated over $150,000 to charitable organizations.  In Key West, FL, "Art Behind Bars" is a program that provides inmates with art classes, whose work is then exhibited and sold with the proceeds given to charity.  Since 1994, the group has donated over $100,000 to 400-plus non-profit organizations.  You can read about more of these organizations here.  These folks are amazing to me.  Prison can tear you down; it can eat you up inside, leaving you with nothing but darkness - or a person can choose, even in their darkest hour, to find a bit of light...and make it brighter.

The Republicans in Congress snuff out that light, or they try to.  They decry, defund and destroy every charitable program that doesn't fit with their way of thinking (ACORN, Planned Parenthood, anything "gay"), all the while making poor people poorer and rich people richer and THEN claiming that somehow, that's the way God wants it.

Jesus was not a fan of the Pharisees.  He called them blind fools, serpants, and hypocrites, accusing them of saying one thing but doing another - accusing them of making heavy burdens for men to carry, without lifting a finger to help.  He accused them of making a show of their faith, but doing very little to back it up with works.  The Pharisees, like our present day GOP, cared little for "the common good".

Who but demons would demonize the poor and the defenseless?  In every religion, save the religion of Greed and Avarice, what the Republicans are doing to the poor, the hungry, the homeless and destitute are some of the greatest sins imaginable.  And when we give in to their constant mantra - when we allow ourselves to believe, even for a moment, that it's the poor and their "entitlement programs" that are to blame for our current financial situation - then we have succumbed to the teachings of False Prophets.

It's sad that I have to look to a fictional character to wrap this up - how extraordinary would it be to hear one of our elected leaders speak these words, or words anywhere close to these?  Thank you, Charlie Chaplin - for reminding me that the Kingdom of God is within every one of us.  Watch...

Can I get an Amen up in here?