Daddy on the Edge of Chicken Shit

Sometimes Corporate America pisses me off.

Why?  Oh, so many reasons, but the first is that they screwed up my blog.  If you came looking for the last blog post, "Daddy on the Edge of a Musical Interlude", you may not have been able to view the second video that was featured, because the idjits at Vimeo put some stupid subscription lock on it.  So, screw Vimeo.  I went to YouTube and got a replacement which seems to be working fine, so if you tried to view the last post and were running into problems, please go back and see the whole thing as it was meant to be seen - there's really some amazing music there.  As for Vimeo, I know you were trying to gain subscribers, but instead you got me telling folks how much you suck, so job well done there  Maybe in the future, you won't put content out there as something good only to later turn around and change the rules...weenies. 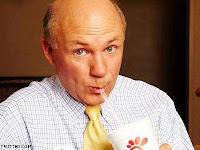 Which brings me to This Asshole!  Yes, Dan Cathy, CEO of Chick-fil-A is back in
the news and back on Daddy's shit list.  As you may remember, Dan Cathy caught a lot of heat for funding anti-LGBT groups.  Protests, counter-protests, boycotting Chick-fil-A, Mike Huckabee calling for a day to support the chickenhawk or something like that - all the whack-jobs came out for that one...

It got nasty for the Chicken Head, because he wanted to build a new Chick-fil-A coop in Chicago, and Alderman Joe Moreno basically said that he wasn't gonna bend the zoning laws required to let Cathy's homophobic chickeny goodness come to Chicago's North side.  So, there was no joy in Mudville...until this story came out (credit to Yahoo News - written by Dylan Stableford)...

Chick-fil-A, the fast-food chain that sparked a firestorm earlier this year after its president made public comments against same-sex marriage, has agreed to stop funding antigay groups, a Chicago alderman says.
Joe Moreno, the alderman whose opposition of a proposed Chick-fil-A on Chicago's north side helped fuel the controversy, told the Chicago Tribune the company has pledged to include a statement of respect for all sexual orientations in a memo to staffers, and has promised that the WinShape Foundations, its not-for-profit arm, would no longer contribute money to groups that oppose gay marriage. Moreno said he will recommend that Chick-fil-A's construction plans be approved.
"Last week, I met with Chick-fil-A executives for the second time this month," Moreno said in a statement on Wednesday. "These meetings cap 10 months of negotiations with the company over concerns about fair and equal hiring and serving practices within the company. Before now, Chick-fil-A had no formal message as it related to the fair treatment of all citizens in our great democracy. Now, for the first time in the company's history, Chick-fil-A provided an official company document, which clarifies their new policies to ensure equality at Chick-fil-A facilities."
The memo, "Chick-fil-A: Who We Are," will be distributed to all corporate employees and restaurant operators, encouraging them to "treat every person with honor, dignity and respect—regardless of their beliefs, race, creed, sexual orientation or gender," Moreno said.
In a letter to the alderman, the company wrote that WinShape is "taking a much closer look at the organizations it considers helping, and in that process will remain true to its stated philosophy of not supporting organizations with political agendas."
Since 2003, the nonprofit has donated millions of dollars to groups that promote "traditional marriage," including Focus on the Family and the National Organization for Marriage. According to the Civil Rights Agenda, a Chicago-based LGBT advocacy group that worked closely with Moreno, Chick-fil-A executives "clarified that they will no longer give to anti-gay organizations."
A Chick-fil-A spokeswoman declined to comment to Yahoo News but forwarded a statement the company made in July:
"The Chick-fil-A culture and service tradition in our restaurants is to treat every person with honor, dignity and respect —regardless of their belief, race, creed, sexual orientation or gender," the statement reads. "Going forward, our intent is to leave the policy debate over same-sex marriage to the government and political arena."

Now, let me tell you - Daddy was frigging ecstatic to read that.  Giddy as a school girl I was, and I posted this story immediately on my Facebook page, praising the company for reversing their discriminatory stand.  Unfortunately, that was all too short lived. 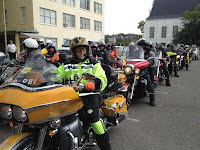 Days after Dan Cathy himself said he wouldn't give any more money to anti-LGBT groups, he tweeted this -

"WinShape Ride for the Family bikers locked and loaded for 200 mile ride to Wilmington out of Charleston."

This event was to raise funds for the Marriage and Family Foundation.  This is the exact group he promised not to support - y'know, the one he's proudly tweeting about supporting right here.

Before, I was pissed at Dan Cathy because he was cherry picking the Bible, and because he and his company were supporting charities that actively wage war against the LGBT community - that's doubly annoying because the idea of a hateful charity seems like an oxymoron to me.

But now, I have to wonder how stupid Dan Cathy thinks we are?  I have met some brilliant liars in my day and, while I don't believe that lying is a good thing, I can't help but appreciate watching a master of the craft weaving a tale of deception that, while being completely fictitious, rings with an undeniable sound of truth. Dan Cathy and others of his ilk are bush league liars; they don't do it well, and they don't even seem to care.  They bullshit for just as long as they have to to get what they want and then act like they never said any of that, that you imagined it, or misinterpreted their words, or the all too popular, "took my words out of context".

But know this - we're gonna keep reminding people to never eat at your Hate-Shack.  We're gonna keep up the campaign that lunch tastes better without homophobia. Until you stop funding your Anti-LGBT friends, we'll do our best to make sure that your employees always outnumber your customers.   "Eat Mor Chikin"?  How about "Keep the Hate Off My Plate"? That's a slogan I can get behind.

My thanks to Willam Belli, Detox and Vicky Vox for providing the following Chick-fil-A theme song...