Daddy on the Edge of the Highs and Lows 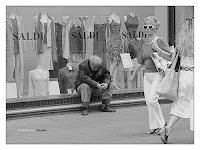 It's easy to forget, but despite all the ups and downs in the economy, we're still one of the wealthiest countries on the planet.

I know, I know - we're supposed to forget about that - "we totally can't afford social programs because we simply don't have the money." Which is just pure horseshit, but it's an election year, so that's what we're expected to swallow.


A lot of the horseshit revolves around what they've decided to call "entitlement programs" - Social Security, Medicare - what you and I call FICA tax. Daddy's been paying the FICA since 16 years of age - that's over 30 years of paying for my Social Security and Medicare, not to mention Unemployment Insurance. So..."entitlement programs"? Damned skippy I'm entitled - stop saying "entitlement" like it's a bad thing that someday I'm gonna want all that money you took from me. That's almost as ludicrous as you idiots in Congress thinking that you are "entitled" to my money. Weenies.


To be fair, Daddy is hoping not to have to use societies safety nets, but Daddy is a White American Male, and wearing that suit makes you look at the world a certain way. It's not necessarily a good way, or a bad way - it's just one facet of perspective. John Steinbeck once said, "Socialism never took root in America because the poor see themselves not as an exploited proletariat, but as temporarily embarrassed millionaires". Never is that more true than in the hallowed halls of Old White Guy Land, but it's true of most Americans. We are a fascinating people - your average American can wake up, step out of his double wide past his '79 Camaro which has been on blocks since the Clinton years and stroll through the trailer park grinning at all the poor sons-a-bitches that are just gonna loose their shit when this fella makes it big. Maybe it's his upcoming American Idol audition, maybe it's the trip to A.C. that he's got planned now that he's totally memorized the "Pocket Guide to Winning Blackjack", maybe it's just the proverbial "dollar and a dream" - whatever the talisman, it's secret magical property can be boiled down to a word - "Hope".


Hope completely defies logic. It denies the reality of today over the dreamy possibility of "Some Day". Despite the Republicans belief that the poor just love getting those "free" government benefits, the poor aren't any different from any one of us. They want their brighter Some Day too.


Believe it or not, the basic welfare recipient doesn't want to remain the basic welfare recipient. One of the main reasons for this is because they have to depend on the government for their survival, and you'd have to be pretty damned stupid to wanna depend on a government like the one we have right now for anything. These assholes decide to shut the whole thing down if the White House Soup of the Day has too many beans in it. For weeks, foreign policy, economic policy, infrastructure measures, the very business of keeping the whole damned country running - all that has been tossed aside so we can talk about nothing but Trans Vaginal Probes, forcing women to look at monitors prior to an abortion, de-funding Planned Parenthood, proposing bills that would force women to tell their employer why they need birth control!?!? Government has lost its ever loving mind and has gone into the Lady Parts Control Business. Do you really think that you'd want to depend on these vagina centered whack-a-moles for your food money? For your prescription money? For your bus money???

The irony here is that they do these things largely in the name of Christ (Everything sounds better with Christ! Trans Vaginal Probes - now with extra Jesus!!). The reality is that the words abortion and blastocyst appear no where in the bible, because Christ did not speak about them. What Jesus did speak about an awful lot was the poor. Jesus loved the poor. Jesus said the poor inherit the Kingdom of God. Jesus said that when you care for the poor, you care for him.

Jesus said love one another.
Rick Santorum said that there can be no such thing as a Liberal Christian; apparently, he knows what "Real Christians" look like, and we ain't it. Well, I know the teachings of Christ, and they are as liberal as you can get. Luckily, I don't need the likes of Santorum to talk to me about religion, or governing for that matter, as he seems to have little real understanding of either. What I would like, if it's at all possible, is for he and his ridiculous political friends and associates to go home. Get out of the way and let us go back to being the type of nation that takes care of our own, that shares in the burden, that truly unites instead of divides, because what y'all are spreading is just pure poison, and too many of us are sick enough from it already.

We are the United States of America.

United We Stand; Divided We Fall.

That's all of us. You don't like it? Then You get the hell out.
We've got Real Work to do.


God Bless Us. Every One of Us.