Daddy on the Edge of Pride and Prejudice

Daddy has been working on a big ass blog post that summarizes the news and views of today's Republican Party - the working title is "Daddy on the Edge of the Republican Caca" and I should have that for you shortly.

In the meantime though, i had to put this out there; in researching Republicans and the darndest things they say, I came across this little gem. At first, I honestly thought they were joking, but it's all too real how they feel. Here it is - the latest, greatest Republican Talking Point:


The White Man is being Oppressed.

Don't believe that they're saying this? Here ya go - from CNN:

• A recent Public Religion Research Institute poll found 44% of Americans surveyed identify discrimination against whites as being just as big as bigotry aimed at blacks and other minorities. The poll found 61% of those identifying with the Tea Party held that view, as did 56% of Republicans and 57% of white evangelicals.

You can read the whole story here.

It makes me wonder if the whites who think they're being oppressed (Rush Limbaugh among them), have a clear understanding of exactly what the word oppressed really means. Here's a little lesson of oppression, good people of WhiteTopia - tell me if any of this rings true for you -


White people are not federally protected from workplace discrimination in the private sector. In other words, you can be fired just for being White.

White people are not allowed to give blood. White blood is suspect and cannot be trusted.

White people cannot adopt in most states. If a White couple were to adopt a child, it would increase the likelihood that said child would become maladjusted. White people have poor judgment and are bad role models.

White People's children cannot go to certain schools. Catholic schools will deny a child entry if the parents are White. Being White is a sin in the eyes of the church.

White people can't live in certain communities. The Fair Housing Act lends no protection to Whites when purchasing, renting, or leasing a home. Landlords can deny you a place to live, or make you pay more because you are White.

White people cannot be Scout Leaders. I know; why the heck would you want to? But there it is. White people are a bad influence on...tying knots, I guess.

White people cannot serve in the military as White. You can serve, and die for your country, but if you admit that you are White, we will boot you out. Maybe we'll kill you.

Now, you have to know that if any of this were true, the entirety of FOX News, the KKK and the Koch Brothers would have waged war. Things like this don't happen to The White Man.

But they happen to gays, lesbians and the transgendered very day.

Daddy comes from a long history of WASP's - my family has been a part of this country since the 1600's and, although there are plenty of tough times, I could never, ever say that we have been oppressed - that we have been so actively denied the rights and privileges afforded to every American, simply because of who and what we are. The idea that this nonsense is being injected into the public debate is ludicrous, and it has no place in serious, adult discussion.

But, as I said, there are people in this country that are being discriminated against on a daily basis. I'm going to their Pride celebration shortly. For those not in the know, from Wiki - 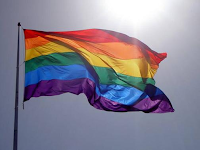