Daddy on the Edge of the Wyoming Trifecta 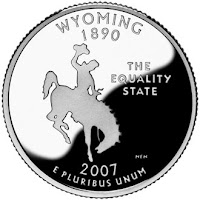 Who knew I'd ever have so much to say about Wyoming?

Truth is, Daddy's just here to apologize. In previous posts, I had said that Wyoming sucked. I said this because it appeared that the leaders of the state had gone just a tad batshit crazy and were trying to knock the rights of the LGBT community and women back into the 19th century.

Turns out though, that there are some folks in charge over there that get it. They've made that quantum leap of logical thinking and now understand that gays, lesbians, women, transpeeps - that they are all people too! Just like the bulk of Republican lawmakers and Daddy and all of the other old, straight white guys on the planet. And maybe, just maybe... they deserve some rights, too. Here's Rachel to tell you all about it:

Visit msnbc.com for breaking news, world news, and news about the economy

Congratulations, Wyoming - there's hope for you yet. Now, onto Wisconsin...
Posted by K at 10:05 AM