Here's Part Two of yesterdays blast from the past article regarding Bank of America. This was originally posted four days after Part One. Enjoy. 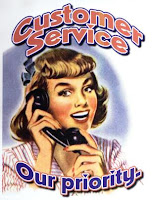 After calling to pester Bank of America two more times after my lovely conversation with Angela Angela (personal friend of Lisa Lisa and the Cult Jam), I finally made it to someone who actually tried to help me (Insert audible gasp here).

Early on in our conversation, I was not expecting much. She was, after all, telling me what all the other "B of A" people I had spoken to were telling me - that my credit report and other various unnamed factors dictate what interest rates I'm allowed to have, and the one I had (17.99%) was the best I could get at this time. However, if I continued to make on time payments for the next 6 months, I might be able to get a better rate.

That's where I finally stopped being nice and got a little testy (balancing on that fine line where you go from asking someone to do something to telling someone to do something and hoping they don't call your bluff). I explained that I had been making on time payments for the last 12 years that I've had this card, so I had already done what they were asking me to do 24 times over! That alone deserved a better rate in my opinion.

Well, she appreciated that, but said she would have to talk to her supervisor and have him call me back. Yes, I flashed back to the mysterious Mr. Misterski too (who has not called me back as of yet - insert look of utter shock here). I said that was fine. I didn't even ask her for her name - I was tired and feeling a bit dejected over the whole process. What did it matter anyway? She'd probably lie about her name like Angela Angela (who lives in New York, New York? Just down the street from Sirhan Sirhan?), and I truly didn't believe that anyone was going to call me back with anything good to say.

Ah, me of little faith. She called me back herself after only about fifteen minutes to tell me that they were going to reduce my rate to 13.99%. That may not sound like much to some of you, but a large portion of my credit card debt is with B of A right now, so four percentage points lower is just fine with me.

So, after calling this company three times, talking to a total of six people and spending a little under an hour of my time, I saved several thousands of dollars in interest payments. I'd say that was time well spent.

In the midst of these B of A dealings, I also called Citibank, who was charging me 18.99% interest. Surprisingly, I only had to talk to two people there before they bumped my rate down to 10.99%. Oh, and something to keep in mind - most of the rates on credit cards, variable APR mortgages and car loans are tied to the prime rate, which has come down at least 1/2 a point in recent weeks, so in some cases, your rate comes down even if you don't ask for it.

One of the guiding philosophies in my life over the last few years has been "Don't ask, don't get". The credit card companies have absolutely no incentive to simply give us a lower rate - we have to ask, and ask, and ask again.